Well, get ready, ladies, because this may become a reality within the next four years.

The IT start-up company, MicroCHIPS, is developing a radical new contraceptive – a tiny mircrochip that can be implanted underneath the skin and operated wirelessly by remote control.

It all started back in the 1990’s with Robert S. Langer, a David H. Koch Institute Professor at Massachusetts Institute of Technology (MIT), and the “most cited engineer in history.” He and his colleagues, Michael Cima and John Santini, developed a microchip technology that could release controlled amounts of chemicals.

Two years ago, their lab received a visit from Bill Gates. He wanted to know if their chip could be used to create a new type of birth control, one that a women could use for many years and turn on or off as she wished. Langer immediately thought about the controlled release microchip, and started leasing the technology to MicroCHIPS.

Measuring just 20 x 20 x 7 mm, the chip is designed to be implanted underneath the skin of the buttocks, abdomen, or upper arm. It contains tiny reservoirs of the hormone levonorgestrel, a chemical already used in some forms of birth control, and it dispenses 30 mcg of the chemical each and every day, unless directed not to. At this rate, it could hold up and provide effective birth control hormones for approximately 16 years. But, should a woman decide she wants to get pregnant, all she has to do is turn the device off with a remote control. 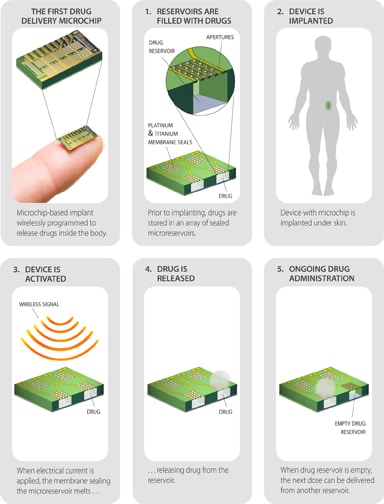 Essentially, the chip works via electric current, which is powered by an internal battery through the seal. That seal is melted temporarily, releasing just a small dose of the levonorgestrel each day.

“The idea of using a tin membrane like an electric fuse was the most challenging and the most creative problem we had to solve,” MicroCHIPS president, Robert Farra, told BBC News, adding that “the ability to turn the device off and on provides a certain convenience factor for those who are planning their family.”

Of course, there are critics of the device, some of which are concerned that the microchip could be “hacked.” But Farra claims that the communication between the remote and implant would have to “occur at skin contact level distance [so] someone across the room cannot reprogram your implant.” He says that the chip will also be encrypted; this will ensure that someone cannot interpret or intervene between the remote and the chip itself.

With the backing of Bill Gates, preclinical testing within the US is expected to start within the next year, and it is believed that the device may be available for sale by 2018.