Blake Lively is growing and glowing! On Monday night the actress beamed in a white Gucci Cruise gown as she walked the red carpet with her husband Ryan Reynolds while attending the 2014 Angel Ball hosted by Gabrielle’s Angel Foundation at Cipriani Wall Street in New York City. 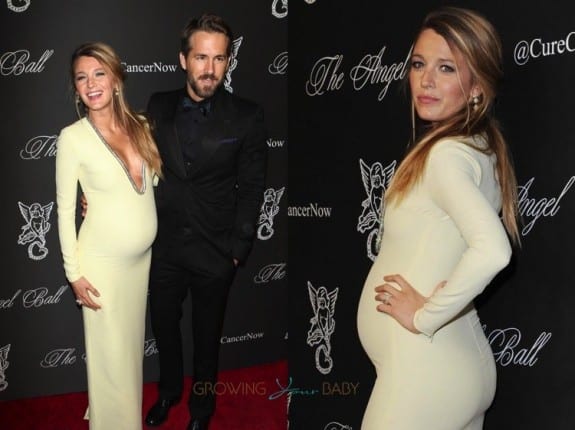 Last week Blake told People.com that her new plan was to wear clothes that are ‘stretchier’  – “Because that’s all that fits!”

She made good on that promise in her belly hugging dress – which we love!

The sighting was the first time the couple has been spotted together since announcing their were expecting.

Last weekend while receiving his star on the Canadian Walk of Fame Ryan told ETalk that he had been mulling over names for their new baby.

“On the plane over here I was trying to think of baby names. I don’t want a name that’s anything pretentious or, like, Hollywood-y,” the actor joked. “So I’m going with Excalibur Anaconda Reynolds … that’s if it’s a girl.”

Let’s hope Blake takes over when it comes time to name their bundle!