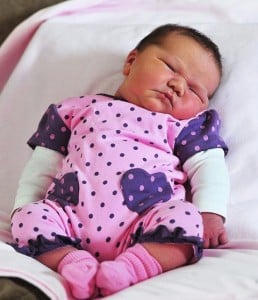 A baby girl made a splashing entry into the world when she was delivered in a water bath weighing an amazing 12lbs 6oz. She is believed to be UK’s third biggest baby girl born naturally.

Naomi Turner gave birth to Bethany Jane Turner in a birthing pool at the North Manchester General Hospital with the aid of only gas and air.

Naomi, 33 is already mom to eight year old Katie, and five year old Billy, who weighed 8lb 10oz and 8lb 9oz respectively at birth. Naomi and her husband Gavin therefore expected their third child too to be in the same weight range.  However Bethany defied the normal by weighing almost double the weight of an average newborn at 7lb 4oz.

Observing the rolls of fat around her arms, Bethany’s grandfather Peter Lowe, 54 has already nicknamed her Popeye.

Naomi, an optical assistant from Bury, said,’It wasn’t until she was born that we realised she was so big. They put her on the scales and everyone was shocked. I was struggling and I was a bit out of it towards the end of the labour but we still managed to have a natural water birth.

‘It was perfectly fine and the labour was no more painful than the two other births.’

Bethany was 14 days overdue when she was born on May 11 naturally after a 3 hour labor. Naomi was at the hospital for two days before she took her newborn home.

‘It was an absolute delight to support Naomi throughout her water birth. We were all surprised when baby Bethany arrived with a huge splash weighing 12lb 6oz, a first for the birth centre.

In the last few decades there has been a steady rise in the number of babies born heavier than average. The current average birth weight of babies in UK is 7lb 8oz for boys and 7lb 4oz for girls which might be as a result of better diets of moms.

Between 1993 and 2003, the number of babies born tipping the scales at above 9lb 15oz increased by 20 per cent and experts believe the trend will only rise in the next ten years.

The Royal College of Midwives use 8lb 13oz as its guideline for the tipping point between a healthy weight and a potentially problematic one.

Doctors say that bigger babies are at a high risk of shoulder dystocia — where the shoulder gets stuck during the delivery. This may put excessive pressure on the neck and the umbilical cord. In extreme cases the doctor may also need to break the baby’s collar bone  for a safe delivery but it has the risk of nerve damage.

‘While most people think the bigger the baby, the healthier it is, there is mounting evidence to suggest the opposite: in fact, babies carrying too much weight at birth will live with the consequences for the rest of their lives,’ says Dr Daghni Rajasingam, a consultant obstetrician and spokeswoman for the Royal College of Obstetricians and Gynaecologists.

‘They are more prone to diabetes and heart disease and are affected at a younger age.’

The NHS announced earlier this year, a trial program where obese expectant moms could be given diabetes medication to control the amount of insulin in their body and thus limit baby’s weight gain.