Starting back in November for the March of Dimes Prematurity Awareness Month some parents who had babies prematurely offered to tell their stories to create awareness about his important cause. Because there are still so many stories to tell, we have decided to continue introducing you to these amazing children. Children with many ranges of issues from their premature birth and sometimes including the sad stories where the child did not survive. Remember, prematurity can happen to anyone, anytime.

To kick this off, our next profile is that of a beautiful little girl named Catherine. Catherine was born on August 10th 2008 at 24 weeks and 2 days weighing a mere 480 grams. 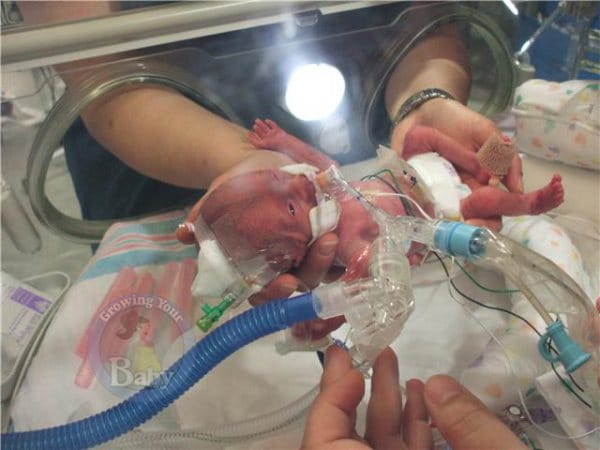 Mom Deb is one of the few who ever really find out why they had their babies early. She had pre-eclampsia. (a condition characterized by pregnancy-induced high blood pressure, protein in the urine, and swelling (edema) due to fluid retention.) At her 24-week checkup, her OB saw that her blood pressure was sky high and Deb also had protein in her urine. Deb was then sent to labor and delivery right away, where additional tests confirmed preeclampsia. She was hospitalized immediately. Catherine was born four short days later.

Catherine was in a very high-tech incubator for about 12 weeks after she was born. She was intubated (on a respirator) for 8 weeks, then on the next step of CPAP (continuous positive airway pressure) for about a week before just switching to oxygen.

The first time I saw her, I didn’t notice anything else around her, but as the days went by I became acutely aware of all the machinery and monitors she was hooked up to, and I learned what each one meant and how to read it. I became very well-versed in medical terminology as far as it related to my daughter. Her room had 9 other beds in it.

The NICU had several rooms, depending on level of care needed for the babies. Catherine was in the highest level, where most NICU babies go when they are first born. Mom Deb was with her every day, spending about 6-8 hours at the hospital. The nurses who Deb says were fabulous, wanted her as involved as much as a mom can be in a hospital setting. They did hands on assessments every three to four hours, and during that time Deb was the one who would take her temperature and change her diaper.

Deb got to hold Catherine for the first time at 18 days old. After that it was about once a week. It is very difficult to arrange holding a baby while they are intubated on a ventilator. A respiratory therapist is involved to make sure the tube doesn’t move- all very stressful!

Once Catherine was just on oxygen (about 9 weeks after birth), mom was able to hold Catherine more frequently. Also exciting, was that once she was on oxygen she could start wearing clothes. At this time even the preemie outfits were falling off of her, but it was something to help Deb gain a sense of normalcy.

Catherine was weighed every evening and at that time she would change her clothes for the day. Mom did help with her first bath, but didn’t get to bathe her much during her entire stay.

On December 23, one month after her due date, Deb was able to take Catherine home.

Santa must have thought I was a good girl that year, because I couldn’t have asked for a better present!

Catherine spent a total of 136 days in the NICU.

On the chart the nurses listed “DOL” (days of life). For some reason that was startling to see that….I guess with a full-term baby, you go home and after a week or so you just switch to weeks/months. “Days of Life” doesn’t come up with a full term baby. With micropreemies, even after the hospital we have two ages we refer to: gestational vs. actual age, at least until they are 2 years old.

As for lasting effects from prematurity, Deb says that Catherine has issues but does not know how long lasting they will be.

Like most mircopreemies, Catherine has chronic lung disease. Basically, this means her lungs sound fine most of the time but because they were not fully developed, she will have difficulty recovering from the flu, colds, etc.. If she catches the flu or RSV, it is likely she will have to be hospitalized and possibly put on a respirator if her lungs aren’t strong enough. It’s something I won’t know until she gets sick. Then we will know just how strong her lungs really are. 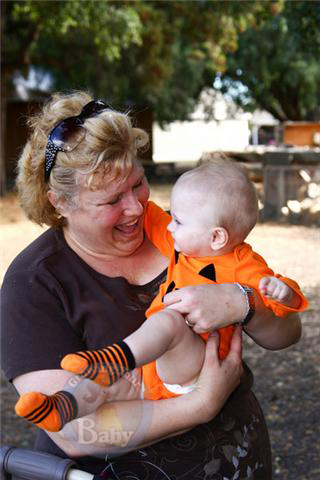 Catherine has a cyst in her larynx as a result of being intubated for 8 weeks (the irritation caused the cyst). Fortunately it does not affect her breathing or eating functionality, but it is pressing on her vocal chords. Any sound/laugh she makes sounds very raspy, almost like she has a cough. Her excited sound is similar to the sound she makes right before she cries… so you would have to look at her face to see what emotion she is feeling. We had this cyst removed last summer, but it grew back (always a possibility). Right now the ENT is monitoring it, and we hope to wait until Spring to have surgery again. (Again, because of her lung disease nobody wants her near a hospital for fear of contracting H1N1 or another flu).

Catherine came home on oxygen 24/7. In July she switched to oxygen just at night.

Catherine is 15 months actual, and is 11 1/2 months adjusted (which is how we measure micropreemies at first). She only weighs 14 1/2 lbs and wears 6-month (and some 9-month) clothes. She certainly doesn’t look like she’s a one-year old! She used to have reflux but that was managed with medication and seems to be a non-issue now. She does however have some eating issues. She does not have a feeding tube and for now the Ped and GI have backed off on that option.

Catherine’s motor skills and growth milestones are extremely delayed. Her fine motor skills are that of a 6-7 month old. Her gross motor skills are more like an 8-month old. She has no teeth yet, and she hasn’t started talking or walking. She is doing a commando-style crawl, and just recently she got up on her knees for the first time. In November 2009 she sat up by herself twice.

Catherine sees an Occupational Therapist two times a week, a Physical Therapist once a week and an Infant Developmental Specialist once a week. She does make progress so all the experts expect her to catch up, but she is on her own timeline.

I suspect I really won’t know about any lasting effects for a few years yet. For example, learning disabilities and autism-like symptoms are very common in micropreemies, but it is too early for such a diagnosis.

If Deb had one piece of advice for a new preemie parent, it would be this:

I actually gave this advice to a new Dad who had just seen his daughter for the first time (his wife was still in recovery). They didn’t know if their daughter was going to pull through or not. First of all, congratulations (many people are afraid to say that when your baby is in the NICU). Enjoy every moment you share with her. Celebrate any little bit of progress she makes. Yes it is scary but keep in mind she is a lot stronger than she looks. Try to look at her, not all the tubes and wires hooked up to her. She’ll have to stay here for a while but you are her parents and she already knows that. Get as involved with her care as you can. She is your baby, again celebrate everything about her! Oh, and don’t be afraid to ask questions, don’t be shy about her care. (Their daughter pulled through and was discharged shortly after Catherine. After that first night, I never saw the dad without a smile on his face!)

I asked Deb to describe Catherine in one word and she said this:

Don’t worry Deb, we know how hard it is to describe your child who has overcome all odds in just ONE word! Catherine is definitely heroic, amazing and most of all a miracle!