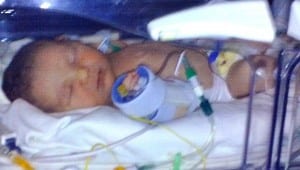 She was merely five days old when baby Scarlett underwent her first heart surgery. But nine months later, little Scarlett is not only healthy she is ready to live a wonderful life.

Scarlett Crowther was born with hypo-plastic left heart syndrome, a rare condition where the left side of the heart does not develop in the womb.

During Rebecca Turner’s 20 week ultrasound it was revealed that her baby had a defective heart. But Rebecca was determined to carry on with the pregnancy.

Five days after she was born Scarlett underwent her first heart surgery at Alder Hey Children’s Hospital on Merseyside. An artificial tube was used by the doctors to help with the blood flow of the heart that was only half of a normal one.

At eight months, the baby girl was back in the hospital for another major surgery. This time doctors attached a vein from her neck to her heart in an eight-and-a-half-hour procedure.

Rebecca calls her daughter a little fighter and says,

“When I hold her now I can’t believe how healthy and happy she is. She is my miracle baby.”

What shocks her even more is the way the infant is showing signs of recovery. After the second operation, she got healthier in no time.

Rebecca said, “I couldn’t believe it when she was allowed home six days later.”

However the challenges are not yet over for the brave heart. Scarlett will again need surgery at the age of four and eight to make sure the vein stays attached.

But Rebecca said, “Although her heart will never be fully formed she will be able to lead a normal life.”

And that is the best news a family could get.