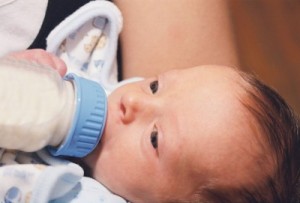 Babies who are bottle fed may eat more than breast fed babies a new study shows. Researchers suggest this may explain the link between breastfeeding and decreased risks of obesity.

A team from the U.S. Centers for Disease Control and Prevention followed 1,250 infants followed for the first year of life to see if how they were fed affected their later eating habits. According to their findings, infants who were breast fed had a greater ability to self-regulate how much they ate, decreasing their risks of obesity. Hormones found in breastmilk, such as leptin and adiponectin, also help stimulate an infant’s ability to regulate their appetite.

Dr. Li points out that there are many factors that come into play with obesity. How an infant is fed is only one small factor, yet an easy one to control from early on. Infants who are fed via bottles are often expected to finish a bottle, even past the point of being full.

“You don’t have to push until the bottle is empty,” Dr. Li said.

When an infant is breastfed it is able to control how much milk is consumed, and is more able to stop feeding when full. This allows a breastfed infant to be able to develop and understand his own internal appetite cues. – Summer, staff writer