After a baby girl was abandoned at the Columbus Circle station in New York City by her mother on Monday, it has come to light that she might have taken the drastic step after she saw her boyfriend shot to death while she hid nearby. The woman had been taken into custody by the police, and the latest statement came from her father. 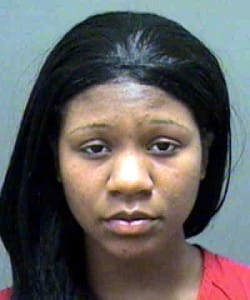 Many were in shock on Monday following reports that 20 year-old Frankea Dabbs left her 10-month-old daughter in a stroller on a busy Manhattan subway station and got back on the train. A stranger looked after the baby for 20 minutes before she was handed over to the police.

Frankea was later arrested and charged yesterday with abandoning a child and committing actions injurious to a child less than the age of 17. She told the police that she had arrived in town on 2nd June and could not handle the pressure of being a mother.

“She felt she couldn’t take care of the baby and thought she was leaving her in a safe public space,” said Stephen Davis, spokesman for the New York Police Department.

Her father Franklin Dabbs of Wilmington, North Carolina said that he had no idea his daughter and granddaughter were in New York. He added that her behaviour had been erratic since the death of her boyfriend whom he knew by his first name Demetrius.

“Three guys came to the house. She was hiding under the bed. She was two months pregnant then. I think that burden was still with her.” 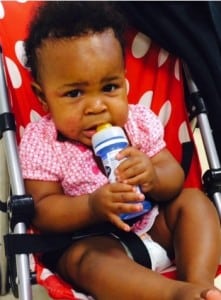 He said that after the incident Frankea always wore sunglasses and wanted to constantly be in a dark room, a possible indication of the emotional state she was in. But he was shocked to know that she could abandon the baby like that.

“I’m very surprised — she was always a good mother to her baby,” he said. “I’ve seen her clean the baby, feed the baby, everything. I’m speechless, really.”

He learnt about the arrest on the news and is now planning to go to New York.

“I know she’s a good mother,” he said. “I don’t understand what happened. I love both of them. All I want is my kids back in North Carolina with me, especially my grandchild.”

The mother’s last known address was in Raleigh, North Carolina, but she had identification indicating that she was from California. Unlike her father’s statement though, she said that the baby’s father had died in California and not in North Carolina.

According to police records she also had an active warrant out of North Carolina for marijuana possession.

“I’m just glad they found the mom and the baby’s fine,” said Catherine Boursier, the woman who found the stranded child on the subway platform alone in a red-and-white polka-dot stroller on Monday.

Frankea was arrested early Tuesday morning on Manhattan’s Upper West Side after the NYPD released a photo of the infant, shown sucking on a bottle and wearing a red-and-white blouse.

The baby girl was taken to St. Luke’s-Roosevelt Hospital Center for a check up and is now in the custody of city’s Administration for Children’s Services.

The police also released a video of the incident showing a woman wearing sunglasses and a white tank top pushing the baby in a stroller through the emergency exit to enter a subway station. She later leaves the station after returning on a subway train without the baby.