Home » Cause for Concern: Traces of BPA in Baby Teethers

A new study published on Wednesday in the Environmental Science and Technology Journal is raising red flags after researchers with the New York Department of Health suggested that babies who chew on teethers could be ingesting small doses of endocrine-disrupting compounds (EDC’s.) 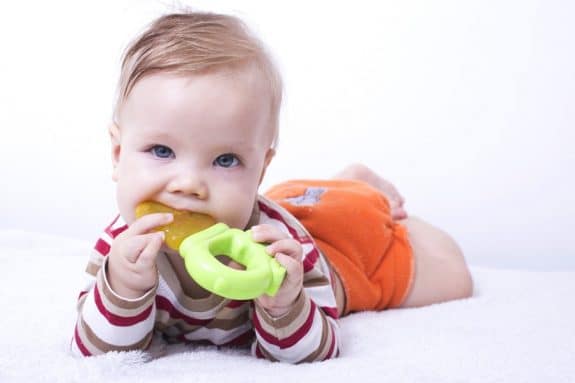 These EDC compounds are a variety of chemicals that could potentially interfere with hormones and have harmful developmental, reproductive, and neurological effects.

The research result was shocking, especially since many of the teethers were labeled as “BPA-free.” The chemical BPA is already banned from baby bottles.

This new study raises concerns because parents typically look for the BPA-free label on products, and the research suggests that the chemical – in lower levels – is still present in products labeled as safe and chemical-free.

Some of the tested teethers released triclosan, an antimicrobial linked to liver cancer. Others contained parabens, a type of preservative linked to thyroid problems. The new report did not release names or brands of the teethers tested in this research.

Health Canada has not yet reviewed the study, so declined comment.

But the American Chemistry Council is already disputing the findings, casting doubt on the amount of potentially harmful chemicals that can leech from these teethers. One official wrote that “it should be noted that the chemicals studied here are shown to be at extremely low exposure levels and well below government-set safe levels.”

The research team counters those comments by pointing out that there remains an ongoing debate over what safe levels for children really means.

Some parents are upset because they now realize that product packaging could be misleading.

For those concerned with the potential of chemical traces in plastic teethers – and pending additional, more definitive research – a safer choice might be found in one of several types of natural soothers available that are made from wood, natural rubber, or metal.