If you’ve ever had the privilege of watching a child grow from infancy into toddlerhood, then you know it is a magical time – not just because of their innocence and sweetness, but also because of how quickly young children learn and grow. However, in children with a developmental disability this time is often when parents start to discover that their children are different. They may not speak as soon as they should, or their vocabulary isn’t expanding. According to a new study, interventions during this time may be the key to ensuring that these delays are less prevalent later on in life.

The new study, conducted by King’s College London and Brown University, Rhode Island, analyzed brain scans of 108 normally developing children between the ages of one and six. Specifically, the researchers were looking at myelin distribution and how it changes throughout early childhood. 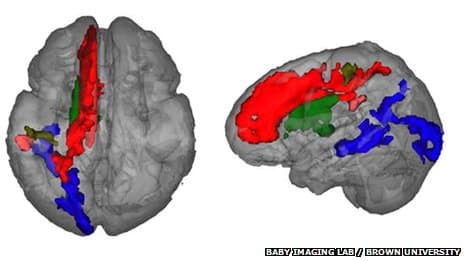 Myelin is the insulation that develops from birth within the circuitry of the brain. Its main purpose is the carry ensure that electrical responses are carried throughout the brain and the body quickly and effectively. It has also been linked to language and communication.

By the time they reach 12 months of age, children usually develop a vocabulary of about 50 words. This rapidly increases to about 5,000 words by the age of six. These skills are developed in a localized section of the brain – the frontal areas of the left-hand side of the brain.

For this reason, they believe that this time period is a critical window for both language development and some types of cognitive development. And, in order to help improve overall development of those with delays, they say that this time is when interventions, like speech therapy, should take place.

“Since our work seems to indicate that brain circuits associated with language are more flexible before the age of four, early intervention for children with delayed language attainment should be initiated before this critical age,” Dr. Jonathon O’Muircheataigh, from King’s College London, who led the study, told BBC News. “This may be relevant to many developmental disorders, such as autism, since delayed language is a common early trait.”

This data could also explain why children seem to do best when they are immersed in more than one language at a very young age, often becoming fluent in both languages with seemingly very little effort.

Professor Dorothy Bishop of the department of Developmental Neuropsychology at the University of Oxford, who did not participate in the study, commented on the importance of this study and what it may mean for children with certain developmental disabilities. However, she also pointed out that more research needs to be done.

“There is suggestive evidence of links with language development but it is too early to be confident about functional implications of the findings,” Professor Bishop told BBC News. “Ideally we would need a longitudinal study following children over time to track how structural brain changes relate to language function.”

Regardless of the need for more research, this is something that parents who have a child with a developmental disability need to keep in mind. After all, this isn’t the first study to find that early intervention important in improving the long-term life and language skills of children with disabilities.