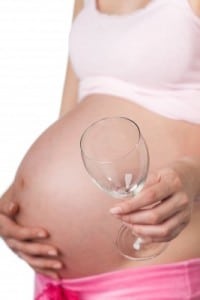 Over the last  few years there has been a lot of mixed information in the media about whether it is safe or not for a woman to drink alcohol while she’s expecting.  Earlier this year it was revealed that almost 8% of women drink alcohol while they are pregnant, prompting the Centers For Disease Control to reiterate that moms-to-be should abstain while they are expecting.

A new study performed in Poland, adds more weight to that recommendation revealing concrete proof that children are affected by the alcohol exposure long after birth. Drinking during pregnancy has previously been found to reduce a child’s IQ and cause a baby to be born with Fetal alcohol syndrome, a disorder that is classified by abnormalities such as a smaller than normal head circumference, low birth weight, altered eye and lip shape and mental or neurological complications. Now, researchers have found that children that were exposed to alcohol during pregnancy can have severe, adverse effects on their central nervous systems.

Presented Sunday at the annual meeting of the Radiological Society of North America (RSNA), researchers looked at 200 children who were exposed to alcohol during their fetal stage, as well as 30 other kids whose mothers did not drink while pregnant or during lactation.

To study the brain’s development of both groups the team used three different MRI techniques. First, they used standard MRI scans to observe the size and shape of the corpus callosum, which is a group of nerve fibers that oversees communication between the two halves of the brain.

Fetal alcohol exposure is believed to be one of the primary causes of impaired development of the corpus callosum, and sure enough, the MRI scans revealed those who had been exposed to alcohol had “statistically significant thinning of the corpus callosum… compared with the other group,” the RSNA said in a statement.

In addition, they used diffusion weighted imaging (DWI) to study six areas of the central nervous system in both groups. This technique maps the diffusion of water in the brain and can be more successful in detecting tissue abnormalities than regular MRI scans, it was explained.

The children who had been exposed to alcohol “exhibited statistically significant increases in diffusion on DWI” than their counterparts — an indication there had been damage to the brain tissue, or the presence of neurological disorders, according to Dr Andrzej Urbanik, chair of the Department of Radiology at Jagiellonian University.

Finally, they used proton (hydrogen) magnetic resonance spectroscopy (HMRS) to study the metabolism in the youngsters’ brains. The results uncovered “a high degree of metabolic changes that were specific for particular locations within the brain,” according to Dr. Urbanik.

The RSNA, citing US Centers for Disease Control and Prevention (CDC) statistics, reports as many as 1.5 out of every 1,000 children born alive suffer from fetal alcohol syndrome, and the costs of treating those victims tops $4 billion annually in America alone.

Hopefully this study, along with convince those who believe that have ‘just one drink’ is ok because it’s not.  Regardless of what anyone tells you, there is no safe amount of alcohol that can be consumed during pregnancy.