Home » Brains of Children Change While Learning to Think of Others 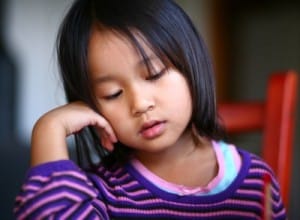 Right around the age of 4 or 5, children start to think and reason what others may be feeling or thinking. This skill is referred to by scientists as “theory of mind.” Researchers have now determined that a specific region in the brain actually changes its pattern of activity when “theory of mind” reasoning starts to take place. This new information may be helpful in achieving an autism diagnosis sometime in the future.

Previous studies conducted  by Rebecca Saxe, a neuroscientist at Massachusetts Institute of Technology and colleagues had determined where theory of mind takes place in the adult brain – a region known as the right temporo-parietal junction (TPJ). In children, the activity was found in children ages 4 and older. A lack of  this activity could indicate a possible autism diagnosis.

Published in the July 31st edition of the online journal, Child Development, the recent study included 20 children between the ages of 5 and 11. Two experiments were conducted to try and determine whether or not the children had already reached theory of mind thinking.

In the second experiment, researchers conducted what is known as the Sally-Anne test. This test includes the use of two dolls: Sally and Anne. Researchers use these dolls to act out a short scene in front of the child. For example, Sally would take a marble and place it in a basket. Sally would then leave the room. Anne would then take the marble from the basket and place it in her box. Sally would return to the room and researchers would ask the child, “Where will Sally look for her marble?”

Former studies and the first part of this study indicate that children develop their theory of mind thinking around the age of 4, so children in this age group should respond “in the basket.” Autistic children, however, are more likely to respond, “in the box” because their theory of mind development happens much later, if ever.

“Given that we know this is what typically developing kids show, the next question is how it compares  to autistic children who exhibit marked impairments in their ability to think about other people’s minds,” said Hyowon Gweon, a graduate student in Saxe’s lab and lead author of the study said, adding that, perhaps, the brains of autistic children show different patterns of activity in the TPJ regions.

Kristin Laguttuta, an associate professor of psychology at the University of California at Davis, who was not involved in the study, says that the recent study significantly increases the understanding of how theory of mind develops in children as they age.

“Getting more insight into the neural basis of the behavioral development we’re seeing at these ages is exciting,” Lagattuta said.

The researchers on the study say that they are now working on another study that will use a similar set of tests in an attempt to discover more about the neural underpinning of theory of mind in children with autism. Gweon says that very little is known about the differences in neural mechanisms involved in children with impairments like autism, adding that:

“Understanding the developmental changes in brain regions related to theory of mind is going to be critical to think of measures that can help them in the real world.”