Home » Brains of Gay Fathers Develop Similar to Those of Heterosexual Mothers AND Fathers, Study Finds 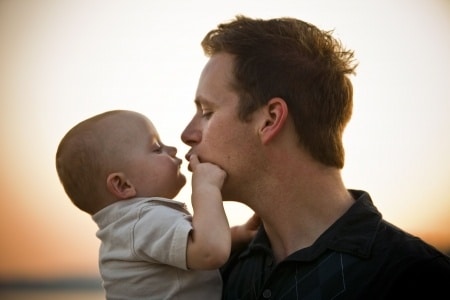 Former studies have suggested that the brains of mothers change during pregnancy and after childbirth to help them meet the needs of their children. Many of these changes equip the new mother when it comes to noticing emotional cues, like hearing their baby cry in the middle of the night. A new study, published Monday in the Proceeding of the National Academy of Sciences, confirms that, but it also goes one step further.

According to the study authors, who had 89 new moms and dads videotape themselves caring for their infants at home, gay fathers reap the same emotional brain changing differences as new mothers. But here’s the kicker – they also have the same cognitive brain changes as heterosexual fathers, giving them the best of both worlds when it comes to parenting preparedness.

In all, there were 20 mothers included in the study. All of them were the primary caregivers for their children. While watching caregiving videos of children that weren’t their own, as well as the videos that did include their own children, the brains of these mothers were monitored for activity by an MRI.

Fathers, who were also shown the videos while being monitored, also showed increased brain activity. However, their heightened activity was found in the cognitive circuits. This helped them decode the body movements of their children, giving them the ability to tell when it was feeding time or when their child needed a diaper change.

Gay fathers seemed to have the best of both worlds. All of them showed the same cognitive changes and deciphering abilities, but gay fathers that were the primary caregivers for their children also displayed the same emotional circuit responses as heterosexual mothers. And, the more time they spent interacting with their babies, the stronger that connection between the emotional and cognitive structures seemed to be.

Ruth Feldman, the study’s author and a professor of psychology and neuroscience at the Bar-Ilan University in Isreal, wrote that the changes in a mother’s brain are brought on by hormone changes during pregnancy and after childbirth. Fathers’ brains only go through the emotion-processing changes when the mother isn’t around. For gay fathers, this means that their brain is working like a mother’s all the time.

“Fathers’ brains are very plastic,” Ruth Feldman told TIME. “When there are two fathers, their brains must recruit both networks, the emotional and cognitive, for optimal parenting.”

What’s more, the oxytocin blood levels (the bonding hormone) in all three groups of parents was found to be the same. In other words, all groups were fully and completely equipped for parenthood, regardless of their sexual orientation.