After being hospitalized last Friday, Backstreet Boys singer Brian Littrell’s 6-year-old son has been diagnosed with A-Typical Kawasaki Disease, an inflammation of the arteries that typically afflicts children. 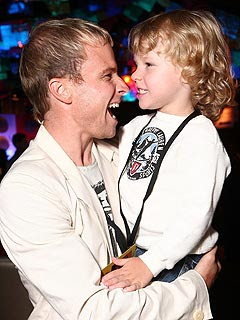 On Brian’s official, the singer posted the following message:

Before being admitted Baylee had been treated for or thought to have had strep throat, hand, foot, mouth disease and erythema multiforme. After receiving a biopsy, blood tests, an EKG and 2 echocardiograms, Baylee was finally diagnosed with A-Typical Kawasaki Disease. We would like to stress A-Typical because Baylee did not have text book symptoms of any of the viruses they thought he had.

We want to thank every one who prayed for us as well as all of the emails and phone calls. Your love and support means so much to our family. The Hospital Staff were absolutely amazing. They made an extremely difficult time in our lives as comfortable as possible.

We are humbled by the love and compassion that people have for our son all over the world, thank you!

Although Kawasaki Disease is not believed to be hereditary, Brian, himself, has battled coronary disease, undergoing open-heart surgery 10 years ago to correct a congenital problem. He has formed a charity, the Brian Littrell Healthy Heart Club for Kids, to “educate children and their families regarding the benefits of adopting a heart-healthy lifestyle.”