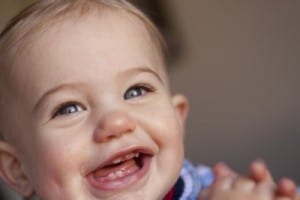 It’s been 50 years since scientists have tried to figure out what makes a baby smile. Back then, the experiment involved attaching a clown toy to a piece of string and dangling it in front of the baby’s face. Thankfully, now that blue-haired, tattooed scientist, Dr. Caspar Addyman, has a little more technology at his disposal; his experiment is a bit more complex.

There is one thing that hasn’t changed between the study done back in the Sixties and the study being conducted by Dr. Addyman, however: the environment is still very kid friendly. Rooms are filled with toys and the staff, like Dr. Addyman, are tons of fun. (A guy with blue hair HAS to be fun!)

Of course, there are also important measuring devices within the room – devices that capture what a baby is looking at, devices that interpret the information and show the scientists when and where in the brain information is being processed. All of those devices can be expensive. Thankfully Dr. Addyman also found a way to help save the grant-funded lab a fair bit of cash.

But the online portion is doing more than just saving the center money; it’s also offering up more “subjects” for the study. Tucker also says that the research is more accurate because the information is compiled by parents: people who are with their children each and every day. It’s also giving them more information than they might have been able to get on their own; after all, you can’t make a baby laugh on demand. And while that information still needs to be analyzed, Tucker says they’re already starting to see trends.

“So far, we’ve found that daddy seems to be the funniest person, with mummy a close second,” she said. “Peekaboo is the funniest game, but tickling, funny voices and blowing raspberries are all sure0fire hits.”

And Dr. Addyman says that we can dispel the myth that those early first smiles are nothing more than gas.

“A lot of first smiles and laughs are happening in the first four months of life, far earlier than traditional theories claimed,” he said. “Babies’ first-ever smiles are often seen as young as one to three months old, with social smiles starting shortly afterwards, between two and four months, and laughter following on soon, at three to six months.”

But why is the study on smiles and laughs so important? Dr. Addyman’s subjects, aged between two months and two years, will hopefully help him find information that can be used to help determine how different developmental groups – like people with Down syndrome or autism – respond to stimuli at different stages. This, in turn, could help to lead to earlier, better interventions. Dr. Addyman explains further.

“Smiling and laughing are indices of our understanding of the world,” he said. “Adults laugh at something when they find it surprising or unusual; it is exactly the same for babies. Finding out what makes infants laugh teaches us more generally about how humans understand respond to the world around them, and also the ways in which that can change.”

And as for why they are using infants specifically, Dr. Addyman says,

“If you are trying to understand the psychology of humans, it makes sense to start with babies. Adults are far too complex. They either tell you what you want to hear or try to second-guess you. [But if a baby does something], it’s bound to be a genuine response.”