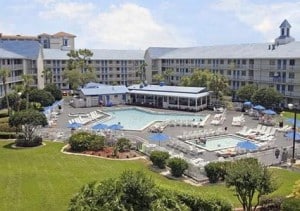 When Helen Beard planned her trip to Orlando she didn’t expect it to be presented with a Medal of Merit award, but her quick thinking warranted such accolades after she caught a toddler who was hanging from a near-by balcony.

The excitement started earlier this week when the British tourist was sitting poolside at the Econo Lodge Inn & Suites, keeping an eye on her 10-year-old son and her partner as they swam. It was then that she noticed 1-year-old Jah-Nea Myles dangling from a fourth-story balcony.

Thinking quickly, Helen dashed through the pool gate and positioned herself right underneath the child who, she said, “seemed to grip on for ages. I saw her tumble.”

“I think you just act instinctively. I ran. I knew I needed to catch her. I had to do something. I guess I was hoping someone else would catch her, but I was the one who was there,” Beard said

Following the incident, the toddler was taken to hospital where is was revealed that she did not sustain any serious injuries.

Her mother Helena Myles told investigators that she left her daughter in the care of friends, who said they didn’t notice Jah-Nea slip out of their room.

At a ceremony on Friday Orlando authorities awarded Helen a Medal of Merit, a citation rarely given to anyone outside of law enforcement.

“Mrs. Beard showed unusual instinct and initiative when she exited from the swimming pool area and was able to catch the child as she fell, thus saving her from extreme physical injuries and/or death,” said Orange County Sheriff Jerry Demings at the presentation.

She was also presented with a Guardian Angel award created especially for her by the Florida Department of Children and Families.

Now, Helen just wants to step back from the spotlight and enjoy the rest of her two-week vacation at Orlando’s theme parks.

“I just want to get back to the holiday,” she said.

She will definitely have lots to share with friends and family when she get’s home!