At one moment Beka Economopoulos was hosting an Occupy Wall Street meeting with her husband and the very next moment she was being rushed to the hospital to deliver her baby girl. But while the activist couldn’t make it to the hospital and delivered in the rear seat of a cab, her husband captured the momentous occasion in a video for all to see later. 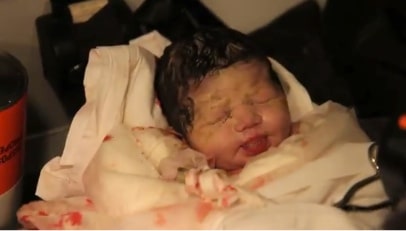 Brooklyn activist Beka Economopoulos was two blocks away from her house when she gave birth in the back seat of a cab on Tuesday. Just 35 minutes earlier she had been hosting an Occupy Wall Street meeting at her home with husband and videographer Jason Jones.

‘We’re both really involved with the Occupy movement, and we were about to host a meeting here. People started showing up, and I started to have contractions…what started as a video team meeting turned into birth support team,” said Beka.

Jason has since then uploaded the video on Youtube titled ‘Baby Born in Back Seat of NYC Taxi’. The new mom can be heard in the video calling her mother and saying,

‘I didn’t even push, it just came out. I thought I had to poop and there was the head Jason caught the baby!’

Jason writes under the video,

‘It was a weekly video team meeting like any other that we’d had since September. That is, until my wife announced that she was having contractions. I’m a videographer with the Occupy movement and happened to have my camera with me. As soon as my hands were free I pulled it out and started shooting.’

Finally when Baby Mila Amie Economopoulos Jones did enter the world, it felt like a celebrity baby birth for the parents as paramedics, policemen and nurses accompanied them all the way to the hospital. 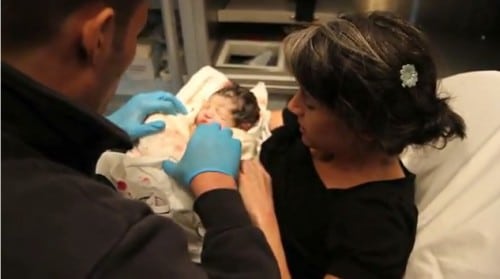 ‘The police commander actually shut down the Pulsaki Bridge and Queens Midtown Tunnel and escorted us to Bellevue.

“Ten or twelve paramedics came into hospital with us. Everyone was so excited. If they had cigars, they would have been giving them out. It was kind of a traumatic birth, but it worked out perfectly,” she said.

This mom is a natural.  Once in the ambulance Beka asked the paramedics to unwrap the baby and allow her to keep her warm by doing skin-to-skin.  She is then filmed nursing her as she spoke to her mom.