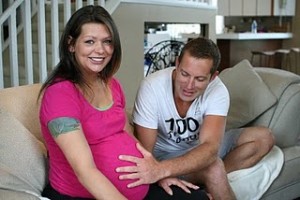 Taking a cue from the popular movie with the same title Sebastian Terry, 29, has decided to create his own bucket list and document his adventures on his website. Although Terry has not received any help from Morgan Freeman or Jack Nicholson thus far, he has received help from a woman in Regina, Canada.

Terry is on good pace to complete his bucket list so far he has completed 35 of the 100 tasks. However, task number 23, deliver a baby, may pose more of a problem. You see, Terry is not in the health profession and is currently single with no sight of children in his future. So he did the next best thing, he posted a cry for help on his website.

“There’s a few things I’m looking to tick off and one of them is to deliver a baby. Anyone have any Ideas?”

To his surprise a women from Regina, Canada responded to his post, offering Terry the chance to be part of her third child’s birth. Terry knowing his cry for help had the potential to draw unwanted harassment called the women to verify her intensions.

“I gave her a quick ring and she was legitimate”.

Terry has arrived in Regina and is eagerly waiting his shot to complete another task on his list. He will not be delivering the baby by himself; instead he will be assisting a midwife with the birth.

“Delivering a baby is one of those special, unique moments and is reserved, generally, for those who are in a relationship or midwives and obstetricians”.
“I said I would love to do that. I think the act of a child being born is just amazing”.

His idea to complete a bucket list came five years ago after the death of a close friend.

“It made me think about life and what’s important. I started to writing down everything that was important to me in life. I just decided there and then to drop everything to complete my list of everything I ever wanted to do”.

Terry has completed a range of items on his list everything from marrying a complete stranger in Las Vegas to doing standup comedy and hopes to complete half of his list by the end of the year.


We wish Terry good luck in his adventures to come while completing the remaining tasks on his bucket list and hope that in the process he reaches his goal in collecting $100,000.00 for children’s charity.