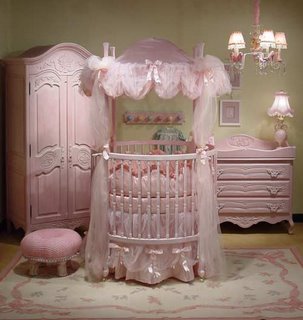 When you are shopping for your new baby the best part is decorating the nursery. Most moms start with a theme and then build from there. Quite often the theme comes from the bedding.

We are all under the impression that we have to buy a big beautiful comforter to cover the baby. Pillows, bumper pads, bedskirt and curtains to match. The whole ensemble can set you back a couple hundred dollars.

In August of 2005 Health Canada issued a warning about bumper pad in the crib. Health Canada does not recommend the use of bumper pads in cribs because they pose an entanglement, entrapment, strangulation, and suffocation hazard to infants.

Between 1987 and 2001, 23 incidents involving bumper pads were reported to Health Canada, including one strangulation death, one suffocation death, and three near-suffocation occurrences.

The presence of bumper pads in a crib may also be a contributing factor for Sudden Infant Death Syndrome (SIDS). These products may reduce the flow of oxygen rich air to the infant in the crib. Furthermore, proposed theories indicate that the rebreathing of carbon dioxide plays a role in the occurrence of SIDS.1

The Canadian Paediatric Society, the Canadian Institute of Child Health, and the Canadian Foundation for the Study of Infant Deaths have also issued statements advising against the use of bumper pads.

Bumper pads have been on the market for many years and a number of reasons are cited to promote their use:

However, when used correctly, bumper pads should not protect infants from bumping against the sides of a crib or from having limbs become entrapped between the slats of the crib. This is because bumper pads are supposed to be removed from the crib by the time that the infant is able to roll over and sit up unaided (a development milestone normally reached between 4 and 8 months of age), which represents the same time frame in which it is expected that the infant would be able to move over and approach the side of the crib.

(It must also be noted that, for the most part, infants do not sustain major injuries from banging their heads against the sides of their cribs because they are incapable of generating enough force to seriously injure themselves through head banging. The frontal bone, which is the part of the head most frequently struck during crib head banging, is the thickest bone in the body and therefore, is capable of absorbing the shock associated with this type of behaviour.

It should also be noted that it remains possible for an infant to entrap his or her limbs over or under the bumper pads and that infant limb entrapment [between the slats of a crib], in the vast majority of cases, results in no injury or minor injury, such as bruising.)

In summary, aesthetic value, the risk of limb entrapment, and the risk of a child hitting their head against the side of their crib are overshadowed by the hazards of entanglement, entrapment, strangulation, and suffocation (potentially leading to death) that children are exposed to through the use of bumper pads.

The doctors at the hospital had instructed me against using bumper pads on our crib. We bought the whole “CribPackage” and it cost my parents $200. Our son doesn’t use the comforter, it’s way too bulky . A pillow is NEVER recommended for a baby. The bumper pads are sitting in the closet and the sheets are fine it’s just you need more than one set for when the baby spits up. Out of the whole set we only use the bedskirt. Our crib doesn’t look very luxurious, but it’s practical. The baby has bumped his head a few times on the bars, but he’s going to be okay.

When you are shopping for your new nursery, pick a colour scheme that doesn’t revolve around one piece of fabric (ie. a border that matches comforter and curtains). Make sure that if you grow tired of the bedding you currently have the whole room won’t clash if you buy something else. Always purchase a good mattress, nice sheets and a great blanket (no tassles). Everything else is not necessary.