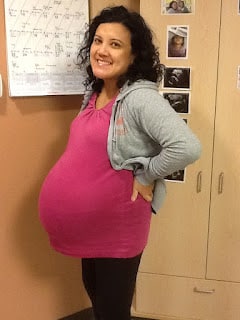 Meryl Ferraro at 32 weeks VIA socalquints.com

In just three minutes, the Ferraros went from being a family of three to a family of eight!

Meryl Ferraro, 39, knew she’d need extra special care for the five babies she was carrying. She and her husband, John, found John Elliott, M.D. online and interviewed him. Satisfied that he could provide the level of care she needed, Meryl and John decided to relocate to Mesa, Arizona until after the babies were born.

The national average gestation for quintuplets is 28 to 29 weeks, but Meryl made it to 32 weeks and five days before one of the amniotic sacs broke. John had just gone back to California to take care of some things the night before.

“Meryl woke up yesterday at 5:15 when one of the baby’s water broke and immediately called me to let me know to get on a plane ASAP,” John wrote on the couple’s website, GRACE Plus One. “I had just arrived back home in CA the night before, and I was able to book a 6:30am flight and got on it right as they were closing the door to take off from L.A.”

According to the family’s website, Meryl had been having strong contractions while waiting for her husband to arrive. Finally, all of the key players were in place.

“Throughout the morning, Meryl had strong contractions and the doctors pushed up the delivery time once all the key players had arrived at the hospital,” John wrote. “With around 24 people or so I the Operating room and another 40-5- people in the baby recovery room ready to receive the babies once they were pulled out, it was game time.”

In less than three minutes, all five of the babies were born – three girls and two boys:

Also parents to 2-year-old Gianna, the couple now has six children. And, as you may have guessed, they couldn’t be happier that all five children were born healthy and without complications. Meryl is also reportedly in good health. They are all recovering at Banner Desert Medical Center. John publicly thanked his wife for doing everything she could to keep the quints in as long as possible.

“The babies are all doing fabulous,” John wrote. “Dr. Elliot told me yesterday that, after he performed the surgery on Meryl to save the pregnancy at 18 weeks (June 12th), he didn’t think the babies would last more than a week. He said that if you would have told him that she would have made it this far, he would not have believed you. He said Meryl did the best he has seen from where she started. Thank you Meryl for being a fighter until the end and giving an Olympic-type performance. Many will never know how much you sacrificed and struggled to give our babies the best chance at a quality life, physically and mentally. I want to say ‘Thank you’ and that I am very, very proud of you.”

Once all of five children have been discharged from the NICU, the Ferraro family plans to return home. For now, they’re probably just enjoying the miracle of life, times five.