Home » Can A Blood Test Detect Autism in Kids?

It is estimated that Autism now affects 1 in 59 children and 1 in 37 boys making it one of the fastest-growing developmental disorders in the U.S.  Currently the most popular way a child is diagnosed is through an extensive psychological exam that includes developmental screening and a comprehensive evaluation. With the increase in diagnosis, there are often 3-6 month wait times for kids to be seen and screened.

An international team of researchers — led by Dr. Naila Rabbani, a reader of experimental systems biology at the University of Warwick — is looking to make the diagnosis easier.  Earlier this year they revealed their tests can accurately detect ASD-related protein changes in the blood and urine. 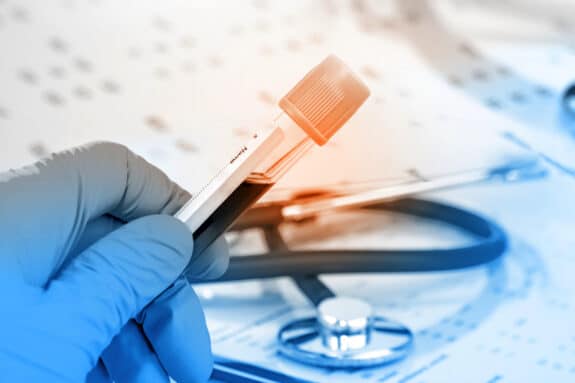 For their study Dr. Rabbani and her team collected and analyzed blood and urine samples from 38 children aged between 5 and 12 who had been diagnosed with ASD, as well as from 31 children who had not.

The results revealed that chemical differences between children with ASD and neurotypical children — that is, children without ASD.

Specifically, the scientists found an association between ASD and damage to some proteins found in the blood’s plasma, or the fluid that carries white and red blood cells.

In children with ASD the test found higher levels of a compound called dityrosine and another class of compounds called advanced glycation end-products (AGEs).

Dityrosine is a marker of oxidation damage, and AGEs are the result of glycation, which is a process wherein sugars combine with amino acids, the “building blocks of proteins.”

The test was ultimately able to identify with 92 percent sensitivity people who have a disease.

A second study conducted by Juergen Hahn, head of the Rensselaer Polytechnic Institute Department of Biomedical Engineering, and member of the Rensselaer Center for Biotechnology and Interdisciplinary Studies (CBIS), saw very similar results.  His research, which uses an algorithm to predict if a child has autism spectrum disorder (ASD) based on metabolites in a blood sample, was able to predict with 88 percent accuracy whether children have autism.

His approach searches for patterns in metabolites relevant to two connected cellular pathways (a series of interactions between molecules that control cell function) with suspected links to ASD.

“Juergen’s work in developing a physiological test for autism is an example of how the interdisciplinary life science-engineering interface at Rensselaer brings new perspectives and solutions to improve human health,” said Deepak Vashishth, CBIS director. “This is a great result from the larger emphasis on Alzheimer’s and neurodegenerative diseases at CBIS, where our work joins multiple approaches to develop better diagnostic tools and biomanufacture new therapeutics.”

An earlier diagnosis in children will allow them to receive therapy immediately.  Often children go undiagnosed for many years which puts them at a higher risk of more developmental delays.  Having a test available that can be taken easily allows kids to get the help they need quickly.