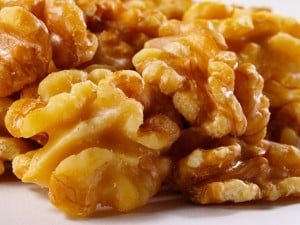 It is estimated that around 70 million couples are affected by infertility; between one-third and one-half of these cases are thought to be due to poor semen quality in men. Many theories about why there are so many men with sperm quality problems exist: unhealthy lifestyles, pollution and Western-style diets are just a few.

Wendie Robbins of the University of California, Los Angeles (UCLA) and her colleagues set out to test the diet theory. They did so by asking a group of men to incorporate walnuts into their daily diet. The findings on their study may be of some interest to couples struggling with fertility.

For the small study, researchers recruited two groups of men. The first group, which included a total of 58 healthy men, was asked to avoid eating tree nuts of any kind for 12 weeks. The second group, which included 59 men who were also healthy, was asked to add 75 grams of walnuts per day to their diet. This amount was chosen because other studies had suggested that this is enough to change lipid levels in the blood without causing weight gain.

Both groups provided sperm and blood samples before and after the study. Sperm was tested specifically for concentration, vitality (dead versus living), motility (how well they travel towards an egg), morphology (shape and structure), and chromosome abnormalities.

At the conclusion of the study, neither group showed any significant changes in weight, physical activity levels or body mass – all of which can affect sperm quality. Researchers did find, however, that the sperm quality of the men who had eaten walnuts had improved over the course of the study. Significant improvements were found in sperm motility, vitality and morphology. Fewer chromosome abnormalities were also noted in this group. The men who had avoided nuts showed no such improvement.

So why walnuts? Walnuts are rich in polyunsaturated fatty acids. These particular fats play an important role in helping sperm mature, and in preserving the integrity of the membrane around the cell. This membrane protects the DNA within the sperm, and gives it the ability to fertilize an egg.

In the Western diet, polyunsaturated fats are most commonly found in fish, fish oil, flaxseed and walnuts. Walnuts and flaxseed also provide ALA, a natural plant source of omega-3 fatty acids.

In addition to improved sperm quality, researchers noted an increase in both omega-3 and omega-6 levels in the blood of the men who had consumed walnuts for 12 weeks. Omega-3 and omega-6 are important for a number of health reasons, including heart health, weight management, and more.

Before you place your fertility future in the hands of walnuts, you should know that the study was partially funded by the California Walnut Commission. Additionally, the study only looked at the sperm quality improvement of healthy men, not men with fertility problems; and the actual fertility of the men was not tested before, during or after the study.

Still, walnuts are a good source of many important nutrients. Adding them into almost any diet could be a good thing, even if they don’t actually increase fertility; if they do, however, that could be an added bonus for some couples.