To those that have been pregnant before, it seems like nothing short of a bold-faced lie when women tell their stories of not realizing they were pregnant until the birth. Yet researchers believe that there are more than three times as many confirmed cases of these surprise pregnancies than there are triplets born. Ashely Zezula and her partner, Mike Innes, from B.C. recently joined their ranks. 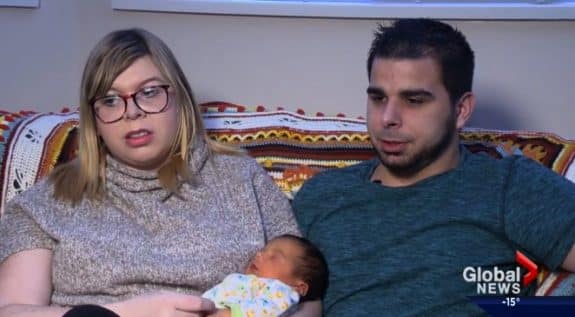 “I had my regular time. I had no cravings, no morning sickness,” Ashley told Global News. “There was no kicking, no pain. I didn’t go into bigger size clothing. I didn’t have to go to maternity clothes.”

The couple did admit that Ashley had gained a bit of weight over the Christmas holiday, but since many people do, they hadn’t really thought anything of it. In fact, nothing seemed to be out of the ordinary. The couple even moved – with Ashely cleaning and lifting the entire time – saying she never once felt like she needed to slow down. She also wasn’t the only one who’d been fooled by the lack of pregnancy symptoms.

“Even Mike, at night, he would wrap his arm around me. He couldn’t feel any indication that there was a body inside me,” Ashely said.

It wasn’t until a trip home from Saskatoon that 7 lb., 7oz. Raymond made his presence known. Ashely started cramping, and the pain intensified as they made their way through Vancouver’s rush hour and on to Mission, which is about a two hour drive from the city. By the time they arrived at their home, Ashely’s found herself in hovering over the toilet in unbearable pain.

Ashley used a mirror from her eyeshadow pallet to get a better look. That’s when she found out that there was something—or rather someone—coming out of her.

“I had him in my hands. And I was aware there was a bum. That’s what I saw. And I think that’s where my mother intuition just kicked in and said, ‘Okay, now we have to focus,’” Ashley said. “I just gave it two more pushes and the baby was in my hands. And all I could do was sit there and focus on, “Don’t drop this thing.’”

By this time, Mike had an emergency dispatcher on the phone who had instructed him to get Ashely on the floor.

“I was trying to calm her down,” Mike said. “I reached, grabbed a towel, wrapped him [up in it] and kept him warm.” 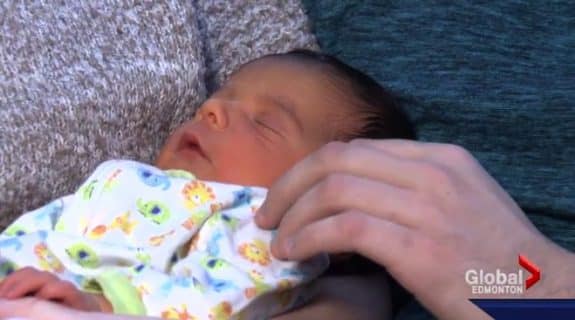 Paramedics arrived on scene shortly after Raymond’s birth and then transported the entire family to the Abbotsford Regional Hospital and Cancer Centre. Other than being a bit jaundiced, and despite his breech delivery, baby Raymond was the perfect picture of health. And his parents . . . well, they’re still a little shocked, but they’re still excited to have him home.