No government system is perfect but a flaw in the communication breakdown between the Canadian Food Inspection Agency (CFIA) and Health Canada could be causing some confusion among formula feeding parents.

Mead Johnson Nutrition, one of the largest formula manufacturing companies on the market, is being permitted to make health claims without any evidence to back it up. Speculations have been made that these unproven health claims may extend to other infant formula brands in the near future.

Two main products are in question – Enfamil A+ and Enfamil Gentlease A+. Enfamil A+ has been on the shelves of Canada stores since 2002 and Gentlease made its debut as a formula that “quickly relieves fussiness” in 2007. Both claims – “A+” and “Gentlease” are considered by the Canadian government to be more than just marketing terms, but health claims. 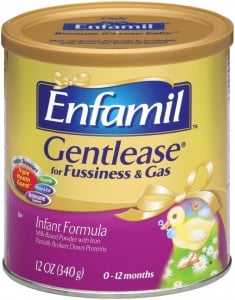 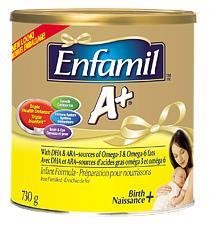 According to the CFIA and Health Canada guidelines, the “A+” claim would require the formula manufacturer to prove that their product is superior to other formula brands. The “Gentlease” claim should require the manufacturer to prove that it is digested easier by babies than other types of formula. Yet, despite the government guidelines, no known evidence exists for either type of formula.

Enforcing the guidelines or taking any action against the claims seems to have something to do with a breakdown in the communication lines between the CFIA and Health Canada, both of which play a part in the enforcement of food regulations. The CFIA is responsible for enforcing rules on food products and Health Canada is responsible for establishing rules for labeling and determining if a product is in violation of those rules.

Records from the CFIA indicate that discussions were held with Health Canada in June of 2008 about the “gentle” claims that were starting to show up on various formula packages. Inspectors also filed a separate report in 2008 with Health Canada. Unfortunately, however, Health Canada didn’t get around to really doing anything about the reports filed. Now, the manufacturer claims have gone on for so long that “it has almost set a precedent for certain statements, such as the A+.”

And unfortunately, the CFIA’s hands were tied in taking any action against the claims. In their report, they stated that they had “difficulty in [taking any] compliance action since enforcement action does not include seizure and detention” of any products that have misleading labeling.

Mead Johnson confirmed that they did receive government queries about their marketing claims, but that those queries were received about two years ago, and since then “there have been no additional comments or inquiries.” They say that they still stand behind the science of their claims but refused to add any further evidence to their statement.

Mothers like Heather Brown say that claims like those made by Mead Johnson create a lot of confusion. “It’s very overwhelming in that aisle,” said the Toronto mother of 10-month-old twins. “”You can see how you can get sucked in.”

Annie Urban, a breastfeeding advocate based out of Ottawa, however, feels that claims like these aren’t helping new parents make better choices for their infants.

“I don’t know if that’s a budgeting issue or lack of will or lack of teeth in the regulations, but ultimately, it doesn’t look like the government is doing anything,” says Urban. “And if they’re not doing anything, then I don’t really see the industry changing the approach or tactics that they’re using.”