In most areas of Canada, it is common practice for a newborn to receive an antibiotic ointment (erythromycin) shortly after birth. But what is this ointment, and why is it given? More importantly, why are Canadian pediatricians asking for a repeal on a law that actually mandates that it be given to all newborns? 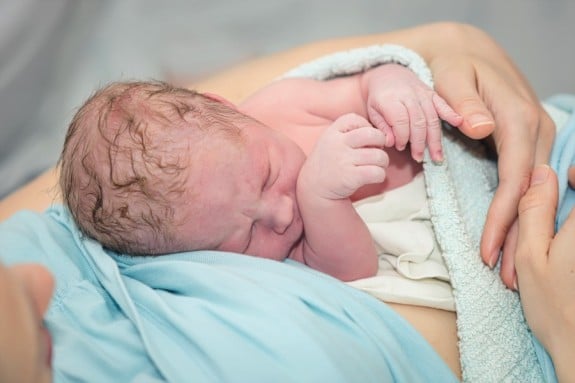 The use of eye ointment in newborns can be traced all the way back to the 1880s, when a German doctor placed silver nitrate in the eyes of newborns to prevent blindness from the sexually transmitted disease gonorrhea. It was considered a huge step forward by the medical community. But, as it turns out, the treatment had to be changed because the drops actually caused the very condition it was meant to prevent in 50 to 90 percent of newborns. That treatment was changed to erythromycin.

Used to prevent conjunctivitis (pink eye) in newborns, which can lead to blindness, the treatment is meant to work against STDs such as Chlamydia and gonorrhea. But other bacteria, naturally found in the vagina and rectum, such as E. coli, can also cause the condition. Erythromycin is meant to protect against that, too.

But the problem is, many pediatricians believe the ointment is ineffective and almost a moot point.

“The problem is at least a quarter to 30 percent of the gonorrhea we have in Canada is resistant to erythromycin, so it probably doesn’t work. And that was really the spur to redo this whole statement, and we think things need to change,” lead author of a position statement against the ointment, Dr. Noni MacDonald from the Canadian Pediatric Society, told CBC News.

The position statement also states that opthalmia caused by gonorrhea has declined because the cases of gonorrhea have decreased. In fact, Canada stopped tracking the number of gonorrhea-related eye infections back in 2000 because the incidences were so low.

And as far as Chlamydia (which puts infants at a 50 percent risk of contracting an eye infection), MacDonald says the drops just “are not effective against Chlamydia—the most common sexually transmitted infection we have in Canada.”

Midwives are also concerned about they drops. Liz Darling, a midwife, said it places her in what she feels to be a very compromising position.

“This is an intervention that’s actually a very strange exception to one of the very basic principles that we have in healthcare, which is that patients should be able to consent to intervention that they are receiving,” Darling told CBC News. “When I talk about the evidence and how effective this is, and how necessary it might be, and what the benefits are, for most people, it is pretty obvious that it is not really something they would want to do . . . [but I] explain that, if a baby doesn’t get the [treatment], then essentially, it means we are breaking the law in that situation, so most people are sort of willing to say, ‘Okay, well, I guess I will do it then.’”

They, and the organization that wrote the position statement, said they would prefer it if women could be given a routine prenatal screening and treatment for gonorrhea and/or Chlamydia. If either are found, treatment to the mother, and even their partner, can be administered to ensure the infection doesn’t cause opthalmia in the baby.