Home » Cancer and Chemotherapy no Hurdle for Becoming a Mom 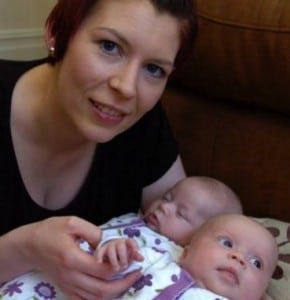 For Clair Sudron nothing is more precious than her twin daughters Bella and Scarlett. 18 months ago the mom was not only struggling to fight off her cancer, she was also told by doctors that she would never be able to become a mother because of chemotherapy.

Clair was just 30 years old when she was diagnosed with breast cancer.

“I can’t really describe that moment when you are told you have cancer,” said Clair, from Milton Road, Hartlepool. “The surgeon said to me he couldn’t believe I had breast cancer, I was young, didn’t smoke, wasn’t overweight and looked after myself.

“I suppose I did fear the worst, there were times where I sat there thinking ‘God, I’m going to be dead in six months.”

Thankfully the lump in her breast was removed surgically but the bigger challenge was yet to come. Doctors advised Clair to go for chemotherapy to ensure that no cancerous cells survived inside her body. While the therapy could save her life, it may also leave her unable to become a mother ever.

Clair lives with her partner, Steven Herring, 24, deputy manager at a bookmakers. The couple did not have any children yet and it was a harsh reality the two had to face.

But Clair was admitted for radiotherapy treatment and began preparing herself for a life without children of her own.

Yet, little more than a year later, she became pregnant.

“I had all of the symptoms of being pregnant but to be honest I thought it was the chemotherapy, it really messes all of your systems up. But I did a few tests and they were all positive,” she says.

Medical experts and the couple were even more surprised when nine weeks test revealed that she was carrying twins.

“I remember ringing my family and telling them I was going round to speak to them, they all thought I was going to tell them the cancer had came back.”

“I had always wanted to have kids but I just figured I was going to have to have get used to the idea of not being able to,” said Clair who works as a sales assistant in Darlington.

Recalling her past 18 month ordeal, Clair says that she now firmly believes that nothing should be taken for granted. She also is motivating others to keep checking for lumps and get medical care as soon as possible.

“I say it to my friends all of the time now, just not to take anything at all for granted,” said Clair.“You never know what’s round the corner. I was just lucky to have the support of fantastic of the experts at Hartlepool Hospital and James Cook, in Middlesbrough, they helped to keep me alive.”

The twins are seven weeks old now and completely healthy.