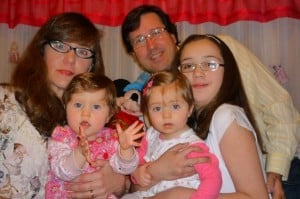 Being diagnosed with cancer doesn’t have to mean giving up on having a family, at least not in today’s world. Monica Zapotoczny, a 45-year-old cancer survivor, is living proof of that. She’s just delivered twins from eggs that she had frozen before cancer treatment, 12 years ago.

“It was a miracle,” Zapotoczny told Elite Daily. “The joy we feel is indescribable, our family is complete. I hope other women who freeze their eggs can take hope from this that their dreams can one day come true.”

While not the first female cancer survivor to give birth with previously frozen eggs, Zapotoczny has given birth with the oldest eggs on record. Before now, the oldest frozen eggs used to produce a viable pregnancy were frozen for seven years.

But it wasn’t all rainbows and gumdrops. In fact, Zapotoczny and her husband, 44-year-old Guillermo Husak, were starting to wonder if they were ever going to have children. They had undergone several rounds of IVF, with no success. But last year, during their last attempt, Zapotoczny became pregnant with non-identical twins. Born January by Cesarean, the twins were named Mercedes and Guadalupe.

Zapotoczny gives hope to more than just cancer patients with her achievement though. She also gives hope to women and couples that want to start their family later rather than sooner. Even though age can cause fertility issues in both men and women, couples can have their best reproductive components frozen early on in life so that they can pursue careers, schooling, financial stability and more.

For best results, fertility specialist Gillian Lockwood of Midland Fertility Services says that women should have their eggs frozen in their twenties and early thirties. It is at this time that eggs are of the highest quality. This will increase the chances of successful pregnancy later on. It should also be known, however, that eggs do become damaged and more fragile with time, even when they are frozen. This is what makes cases like Zapotoczny’s so rare.