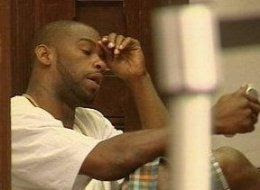 Knoxville residents are calling for the castration of a 29-year-old man who can’t pay child support for the 21 children he has fathered with 11 different women.

Desmond Hatchett’s brood came to light after authorities in Tennessee took him to court for non-payment of child support.

He has apparently set a U.S. record but said: ‘It just happened.’

He added that he would not have any more children. ‘I’m done. I’ll say I’m done,’ he said.

The busy dad, who earns a minimal wage, told TV reporters he knows the names and ages of all his offspring.

Their ages range from newborn to 11 years old.

He is believed to have fathered four children by different women in the same year.

Authorities in Knoxville said they plan to take half of his monthly salary to pay for the youngsters but officials said that would work out to just over $2 a week for each.

‘The children can’t all be supported by Desmond, so the state of Tennessee has had to step in.’

Now that he has appeared on TV, U.S. authorities are braced for more women to come forward claiming Desmond is the father of their children.