Home » CDC Survey Shows Breastfeeding is on the Rise 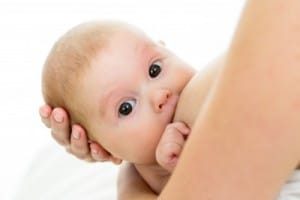 Current recommendations from the American Academy of Pediatrics says that babies should be breastfed exclusively for six months, and that breastfeeding should continue, along with solid food feeding, until 12 months. But getting moms and babies to that milestone has taken a lot of effort.

Many hospitals have banned the solicitation of formula diaper bag gifts. Others have adopted a breastfeeding friendly environment, which requires the hospital to follow certain guidelines regarding how they handle the care of new mothers and their babies. Some employers have made it easier for mothers to pump, giving them breaks and private areas to pump. And educational efforts have been broadcast via all forms of media worldwide.

It seems that, according to some recent information from the U.S. Centers for Disease Control and Prevention (CDC), the breastfeeding campaigns and efforts are making a real difference. In just the last decade, the percentage of mothers who say they’ve breastfed during the early postpartum stage has increased from 71 to 77 percent.

“This is great news for the health of our nation because babies who are breastfed have lower risks of ear and gastrointestinal infections, diabetes and obesity, and mothers who breastfed have lower risks of breast and ovarian cancers,” Dr. Tom Frieden, director of the CDC, said in a statement to Live Science. “It is critical that we continue working to improve hospital, community and workplace support for breastfeeding mothers and babies.”

What’s more, it seems that mothers are breastfeeding longer. The rates for women nursing up to six months increased from 34 percent to 50 percent, and the rates of mothers nursing for a year or longer increased from 16 percent to almost 27 percent.

The biggest benefits are those most obvious – those proven by years and years of study, including reduced infections for babies, increased bonding between mother and child, and lowered risk of certain cancers for mothers. But newer studies also suggest that babies who breastfeed are less likely to develop certain health problems later in life, including obesity and ADHD. Others have shown that children may have a higher cognitive development if their breastfed. And mothers may even have a better chance at staving off postpartum depression.

Of course, not all mothers can breastfeed. Hormonal disorders, medications and more can get in the way, especially when it comes to nursing long-term. There are some possible substitutions, however, if a mother who can’t breastfeed wants to give her baby breast milk. One example is milk donation programs, which provide breast milk via a donor. Moms can even use an SNS (supplemental nursing system), which is designed to mimic breastfeeding for mothers that cannot produce milk or do not have enough supply and wish to give supplemental donor milk.