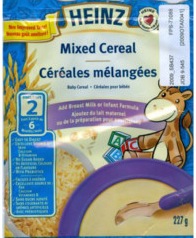 The Canadian Food Inspection Agency and Heinz Canada are warning the public that Heinz Mixed Cereal for babies should not be consumed.

Their website states that the product – Heinz Mixed Cereal, a Baby Cereal, Stage 2, From 6 Months in the 227 gram package – may contain elevated levels of Ochratoxin A and is being recalled.

It is a mycotoxin produced by some fungi that can grow in certain food crops such as grains, grapes and coffee beans, and is classified by the International Agency for Research on Cancer as a possible human carcinogen.

The product has been distributed nationally, but there have been no reported illnesses.

The CFIA says the cereal shouldn’t be eaten – but if it has, there is no need for other actions since even the highest levels of ochratoxin A found in these products are not high enough to pose a health risk when consumed as part of a normal diet over the short term.