My youngest son loves to create.  Draw with crayons, markers, paint pictures and glue stuff together.  In preparation for Kindergarten we have been working on numbers, letters and learning his name.  And while he is mildly interested in learning he isn’t completely buying into the whole thing.

My oldest son is very similar.  He is on the Autism spectrum and needs a full time Education Assistant to keep the information flow moving while he is at school.  He also doesn’t really care for school so he refuses to practise with me when he comes home.

Looking for new ways to get both of them to do more I decided to paint a couple chalkboards on the walls in our house and give them carte blanche on what goes on the boards.  Not sure what the response would be, I was pretty excited when they got the chalk in their hands. 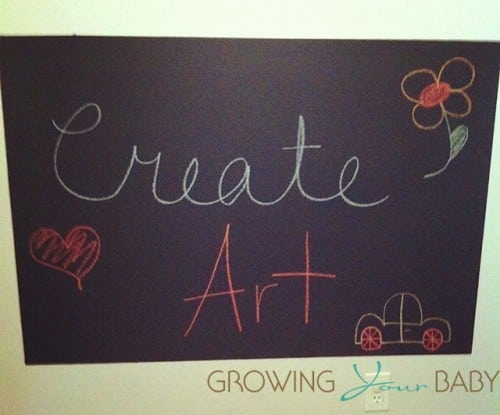 Initially they both just started to scribble.  Both of them go to school and they aren’t allowed to write on the chalkboards there so they were a bit unsure.

Then I told them the board was like a piece of paper.  What would they draw on a piece of paper?  My little one immediately starting to build a house, while my oldest wrote his name.

Writing is one of my oldest’s biggest challenges.  He has very poor fine motor skills so his letters are big, un-proportioned and all over the place.  BUT because it was colored chalk, and on the wall, all of the sudden he wanted to show off.  On top of writing his name, he wrote the numbers 1-20, drew me a car AND sounded out a sentence.  Before bed he picked up the chalk again and wanted to show me more things he could do.  This time he traced over his name that was written at the top of the board in script and drew me a house.

The next morning we moved downstairs to the bigger chalkboard I painted and they wanted to draw aliens, houses, people, spaceships.  It was pretty exciting.

I don’t expect our new creative space to make him an astrophysicist, but I think it will make learning easier because the space is larger and there is no pressure.

In the past I have used flash cards to help my oldest learn his ‘word wall’ words but now I write them on the chalkboard and leave out a couple letters and have him decode the proper spelling. And if he wants to draw a few stars on the board in between than so be it because after all – every kid should know how to draw stars.

They are free to create whatever they want AND mistakes are easily correctable with an eraser.

If you don’t have a chalk board in your house I highly recommend one.  This also falls into the “I wish I had this growing up” category that I have created since having kids.  Because who doesn’t want to draw on the walls?

To create a chalkboard in your home simply swing by your local paint store and pick-up a can of chalkboard paint, tape off the area and paint as usual.  Once you have the paint the possibilities are endless.  You can paint a panel inside your cabinets for family notes, paint the surface of a table or cover a piece of wood for something more portable.  Ours dried in 30 minutes, so the kids were ready to draw in no time!

AND, if you kids tire of it, just prime and paint over with your original paint.

I should note that the only downfall I have found is the chalk dust that collects on the carpet under the board.  I am in the process of testing a few brands of chalkless chalk to find the one that leaves the least amount of mess.