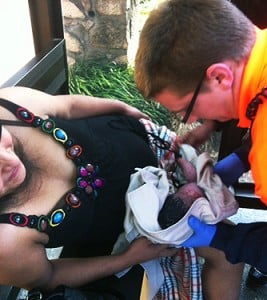 Emily Brewer, a 36-year-old doctoral student at UNC Chapel Hill, learned that sometimes, things really do happen for a reason. What was supposed to be a simple trip to the library turned into a miraculous event, one that neither she nor her two-year-old son, Dylan, are liable to forget.

Dylan’s sitter had cancelled earlier that day. Emily needed to make a trip to the campus library. So, rather than skip the trip, Emily decided to take Dylan along. Emily told The Herald that Dylan loves clocks and chimes, so rather than going straight home after the library, Emily treated Dylan to a trip by the Bell Tower. It was that slight delay in their trek home that put them in the right place at the right time.

While headed to the bus stop near Abernathy Hall, Emily and Dylan happened upon a pregnant woman in distress. Neither the woman nor her mother spoke English, and Emily didn’t speak Spanish, but it quickly became clear that something was wrong. Finally, Emily was able to understand that the woman’s water had just broken. Then, in a rapid turn of events, the baby dropped out of the mother and into the loose pants she was wearing.

“It was the most improbable place, with cars zooming by,” Emily told The Herald.

The woman’s mother helped hold the baby up and Emily dialed 9-1-1. With the help of the operator, both women were able to successfully remove the woman’s pants and help finish the delivery process. Emily’s responsibility during the process included cleaning the baby with the woman’s scarf and then taking the woman’s mother’s shoe lace and using it to tie off the umbilical cord. Shortly after that, Orange County EMS and Chapel Hill police officers arrived to take over.

According to Emily, the entire experience lasted less than 10 minutes. It happened so fast, in fact, that Emily didn’t even have a chance to catch the woman’s name before paramedics loaded her and the baby boy onto a stretcher and whisked them away.

“It happened too quickly to even process,” Emily said.

On Wednesday evening, The Daily Mail reports that Ms Brewer went to the hospital with her son and husband, Patrick to try to track down the woman and her newborn.

A nurse put the pieces together and asked the new mother, who they learned was called Aguilar Lopez, for permission for the family to visit.

‘The nurse said her face lit up,’ Ms Brewer said, adding of Lopez: ‘She was calm and happy and beautiful, and the baby was at her side wrapped up.’

During their official introduction, Emily was introduced to the baby girl, who was a healthy 5lb 9oz.  She later learned that new baby had been named Emily, because Aguilar thought she was ‘an angel’.

‘I am humbled,’ Brewer told the Mail Online. ‘Every single person who participated in my son’s birth is in my memory and always will be. To know that I am part of this woman’s birthing experience is just extraordinarily humbling.’