Home » Charlize Steps Out With Her Son Jackson in Madrid

As she continues her promotional tour for Snow White and The Hunstman, new mom Charlize Theron was photographed leaving her hotel carrying her son Jackson. 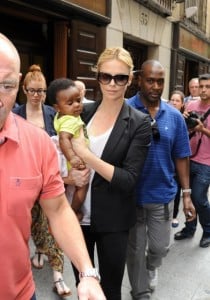 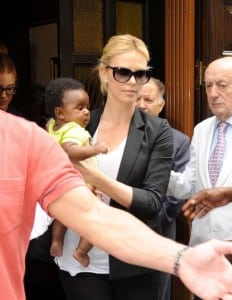 The baby, it appears, has turned into a little Jetsetter recently; visiting Paris, London and now Spain in just 7 days.  Charlize surprised many when she announced Jackson’s adoption in March.  But it is something she has dreamed of since she was 8.

“My mother found [a letter I wrote]. It said, ‘Would you please take me to orphanage, so that I can go and adopt a baby?'” South African Theron, 36, recalls in the June issue of Australia’s Madison. “I always knew I would adopt. Always.”

Not planning to be a single mom, the actress says,

“You know, I don’t think any mother aims to be a single mom. I didn’t wish for that, but it happened.”

Starting a family, however, was more important than waiting to find the right partner.

Gerda, it appears, is more than thrilled with her new role as grandma.  She was photographed out with Jackson in Paris last week, showing him around a taking lots of grandma/grandson pictures!