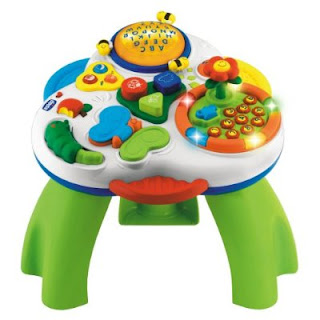 Chicco is well known for its educational and innovative children’s products but this was our first. Upon opening the package, I was happy to discover how easy it was to assemble the table. I was even more relieved to find batteries already installed, as two sets of eyes were watching my every move, waiting as patiently as possible for the table to be ready to play with. In no more than five minutes from the time I opened the box, my four-year-old son and one-year-old daughter were taking it for a test-drive.

As I sat back to observe, I noticed the gentle male voice that spoke in English and was impressed with the original songs and music that accompanied the voice. The flower section plays a lovely song as numbers one through ten are highlighted. My son was intrigued with the bee section, although the song the bees sing is a little creepy to me! However, he played it repeatedly and loved it. It actually became an object of debate as both kids wanted to turn the bees to start the song.When my son finally moved on to something else, my daughter was able to explore on her own. Although she is not yet walking, she loves to pull herself up to standing and then attempt to climb everything in sight. I thought this would be an issue as the table is not particularly big; however, it was very stable and easily withstood all her pushing and pulling. It’s the perfect height as she was not able to get her knee up high enough to climb on top. She was very entertained by the songs, lights and colours on the table. In the MUSIC mode, she listened to music nursery rhymes and sounds, while the WORDS mode exposed her to numbers, letters, shapes and colours. She methodically manipulated areas on the table to hear the music and words she liked best. It was definitely a hit with her! 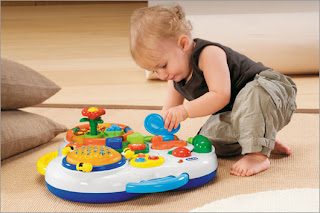 To my surprise, the table was also a hit with my son. The second language on the table is Spanish, and although he speaks French at school, his only real exposure to Spanish has been through television shows that use limited language. In the week since the table arrived, he has memorized the songs and has actually made connections to French and English. In the flower section, he points to the numbers as he sings them in Spanish. It’s the same with the alphabet in the bee section. Being a second language teacher myself, I find it amazing to hear him speak (sing) Spanish so well in such a short amount of time.

Chicco’s “Talking Garden Activity Table” has been a huge success in my house both with my one-year-old and my four-year-old. Playing with numbers, letters and words in two languages helps children develop language skills that they will build on their entire life. And being entertained while learning these skills is priceless. Reviewed by Cari