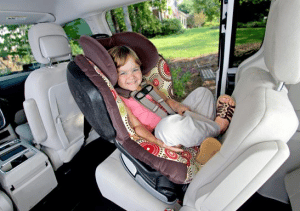 Car crashes are the leading cause of death for children over the age of three, and more than 140,000 children visit the emergency room each year for injuries related to automobile accidents. With a statistic like that, car safety should be a priority for parents. Yet a recent study found that only a small percentage of parents in the U.S. actually have their children properly secured while riding in a vehicle. This is partly attributed to the ever-changing car seat safety recommendations.

“For parents, it’s not anything they would have done as kids,” said Dr. Michelle Macy of the C.S. Mott Children’s Hospital at the University of Michigan, Ann Arbor. “The recommendations are confusing and have gone through a lot of changes.”

To make matters even worse, the laws are different in each state. There is one place that parents can turn to, however, to ensure a consistent guideline, no matter where they live – the American Academy of Pediatrics (AAP). While the AAP may have the most conservative guidelines regarding child restraints, being conservative is actually a good thing in this instance.

According to their guidelines, children under the age of 2 should be in a rear-facing car seat. Children over 2 should sit in front-facing car seats until they surpass the maximum weight limit. A booster seat should then be used until the child sits at 57 inches tall (the height of an average 11-year-old). The AAP also says that children should never sit in the front seat until they have reached 13 years of age.

Unfortunately, few parents actually fell in line with these recommendations, according to Macy and her colleagues. In fact, only 3 percent of children between the ages of 1 and 3 were sitting in a proper, rear-facing car seat, and only 10 percent of 8- to 10-year-olds were properly restrained in a booster seat. These figures were determined by observing nearly 22,000 children at restaurants, child care facilities and gas stations between 2007 and 2009.

Researchers also found a very large gap in the child safety restraint use when comparing white children and children of Hispanic or black descent. Black and Hispanic children were 10 times more likely to be completely unrestrained when compared to their white counterparts. This gap has long been recognized by pediatricians, and it is something they have worked hard to fix over the years, according to Susan Laurence, an injury prevention specialist who heads the car seat program at Cincinnati Children’s Hospital. She says that events that help educate parents of all ethnic communities about car seat safety does help.

“It’s an awareness issue,” Laurence stated. “I don’t think that parents want to do something to harm their kids.”

So what do you look for in a car seat? How do you ensure that your child is safely secured? First, make sure you follow the AAP guidelines. Secondly, Macy says that parents should search for car seats with high maximum weight capacities. Not only will this extend the life of the safety seat, it will help ensure better safety for your child.

“It’s more the children’s size than their age,” Macy said.