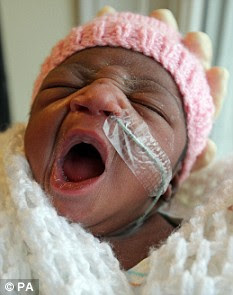 A group of children found newborn girl abandoned in a Tesco bag outside a block of flats yesterday.

The infant, who was less than 24 hours old, was crying and extremely cold, despite being wrapped in a blanket and placed inside a re-useable supermarket bag.

The baby has made a good recovery and started to drink milk after being taken to hospital last night.

Police are desperate to trace her mother. They fear she could be suffering both physically and mentally.

‘I would like to stress to anyone, in particular the mother, that they should not hesitate to call us.

‘We are concerned for the welfare of the mother and want to ensure that she is receiving the appropriate medical attention. The sooner we can locate her the sooner she can get medical help.’

The baby , who has been named Grace by the nurses, may be black or Asian. Police think that she was left outside the flat between 4.30am and 8.30am yesterday.

Even though the baby was very, very cold she has made a speedy discovery because she was brought to hospital very quickly and treated.

Let’s hope that they can do the same for her mom.