Home » Children Lose 7 Minutes of Sleep for Every Hour of Television, Researchers Say

For anyone, television has the potential to increase the risk of obesity and heart disease. This is especially true among those that, on a daily basis, spend more time watching television than being physically active. Children face the very same risk, but it extends much, much further than obesity and future health problems. 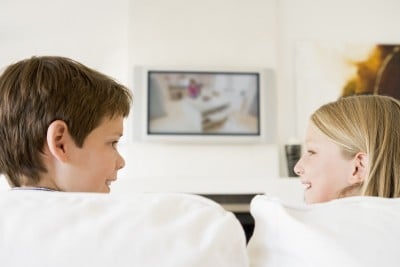 While there’s nothing wrong with watching a favorite movie with your child from time to time or allowing them to watch their favorite television show, parents should be fully aware of the emerging research regarding television viewing among children. The latest ties into some former studies regarding sleep, behavior, and possibly even ADHD.

A study of 60 four-year-old children from 2011 found that fast-paced television programs were more likely to decrease a child’s concentration level. When compared to children that watched slow-programming or colored, children who watched fast-paced programming showed decreased mental functions, including problem-solving abilities. They also displayed more difficulty in delaying self-gratification and maintaining control. The duration of all control activities was just nine minutes.

Sleep deprivation can have a similar effect. Think of how you feel when you’ve failed to get enough sleep – irritable, groggy, you struggle to focus and concentrate on your daily tasks. Children experience these difficulties as well – only for them, it may be magnified because their little brains are still developing.

Another study indicated that poor sleep in children lead to poor learning and a lack of social skills. In it, more than 11,000 children from the UK who had no regular bedtime or a later bedtime were shown to have lower performance on math and reading tests when compared to those that had a consistent bedtime schedule.

And one expert (Dr. Shalini Paruthi, director of the Pediatric Sleep and Research Center at Cardinal Gennon Children’s Medical Center) believes that some cases of long-term sleep deprivation are being misdiagnosed as ADHD.

“Sleep is so closely related to so many aspects of a child’s behavior,” Dr. Paruthi, told St. Louis Post-Dispatch. “Children who do not get enough sleep can easily become irritable and moody. They may act out more and exhibit hyperactive behaviors because they are so tired. We certainly know that poor sleep can lead to poor performance in school, but it can significantly affect a child’s social life and ability to interact with others as well.”

So if sleep is so important, then it would make sense that we parents need to consider all possible obstacles to getting children enough good, sound sleep. This most recent study, set to publish in the journal Pediatrics found that television viewing may very well be one of those obstacles.

After looking at 1,800 children aged from six months to just under eight years old, researchers at MassGeneral Hospital for Children and the Harvard School of Public Health found that each hour of television corresponded with seven minutes less sleep at night. Children who had a television in their room by age four were found to have a half-hour reduction in sleep each and every night. The trend also seemed to be strongest in boys.

While seven minutes per hour of television may not sound like a lot, it all adds up – rather quickly. If a child watches two hours of television each and every day, that’s 14 minutes less sleep each night. For an entire week, that’s more than 90 minutes of lost sleep. Again, for developing brains, that hour and a half can make a huge difference!