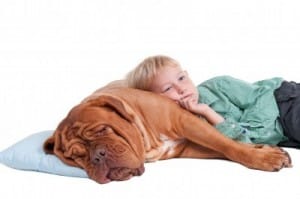 If you’ve ever considered adding a pet to your family, but dismissed the idea, a recent study may cause you to reconsider. After performing a series of experiments on how young children react to animals versus toys, researchers believe that children are more fascinated by living things – spiders and snakes included – than toys, even if those toys were made to replicate real living creatures.

For the study, Researchers Rutgers University and the University of Virginia studied children between the ages of 11 months and three years to see how they reacted to various live animals and toys. Animals ranged from cute and cuddly (hamsters) and scary (tarantulas and snakes). Note: For safety purposes, all animals were caged and placed where they could only be seen, not touched. Toys included some of the most popular children’s toys – balls, airplanes and dolls – as well as toys that were made to replicate live animals – toy spiders, snakes and stuffed puppies.

Overall, researchers found that the children asked more questions about, talked more about and gestured more often to the live animals than the toys. Because of this, researchers believe that pets may be helpful during the early stages of childhood development.

“The fact that children find animals appealing suggests that children may benefit from having an animal, like a pet, in their lives,” said Vanessa LoBue, the main author on the study. “Our research develops that idea that animals may be a good instrument for learning. This is borne out by the widespread use of animal characters in children’s books and TV programs.”

Researchers also believe that children may learn better, overall, if they are taught with real animals, rather than books.

“Given children’s avid interest in animals, they would most definitely benefit from having a pet at home,” LoBue said. “Parents can even use their pets as a platform for learning. Pets can be used as an exemplar. For example, if you’re trying to teach your kids something about biology, children might be more interested if you explain using a live pet, instead of a book.”

What was most intriguing about this study to me, however, was that the children were more interested in all of the animals, not just some of them. Even when spiders or snakes were placed on display, children preferred talking about them more than the toys. It seems that fear of certain animals or living things is a learned behavior, based on this information. Researchers pointed out, however, that the children may have reacted differently to the animals, had they not been caged.

“The snake and spider were in cages, creating a safe environment for the child, and the parent to interact. If they were presented with a snake or spider in their back yards, they may not have reacted with such interest,” LoBue stated. “The implications are that children are really interested in all animals from an early age, and that fear of threatening animals is learned at some point in development. The implication is that fears, even our most common ones, are learned at some point in development, and the next step is to examine how they might be learned so that we can avoid the development of intense fears and phobias.”