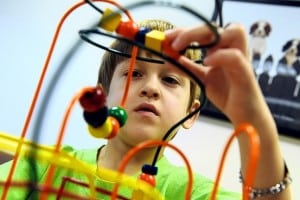 When talking about autism and the difficulties that those diagnosed with it face, most people will highlight the social difficulties of it. However, there is a myriad of issues that autistic individuals face. A recent study, published in the Journal of Neuroscience puts this into perspective after finding that autistic children can detect movement twice as fast as their typically developing peers.

Many autistic individuals suffer from hypersensitivity to stimuli – light, sound, motion, touch. For some, certain stimuli can be downright painful. According to Duje Tadin, Ph.D., one of the lead authors on the study and an assistant professor of brain and cognitive sciences at that University of Rochester says that the information from her study may help explain why stimuli can be so terribly painful, and it may even tie into some of the complex social and behavioral deficits that most neurotypical people struggle to understand.

“We think of autism as a social disorder because children with this condition often struggle with social interactions, but what we sometimes neglect is that almost everything we know about the world comes from our senses,” Tadin told PsychCentral.com. “Abnormalities in how a person sees or hears can have a profound effect on social communication.”

While previous research has indicated that autistic individuals have enhanced visual abilities with static images, this is the first study to find that they also have sharper awareness of motion, study authors said.

The study, which involved 20 children with autism and 26 children without (between ages 8 and 17), asked its young participants to watch brief video clips of moving black and white bars and then tell researchers which direction the bars were headed – left or right. Each time they guessed correctly, the video became more difficult and a little shorter. If they happened to guess incorrectly, the video became easier and a little longer. This helped the researchers determine how quickly children perceived motion.

“Kids with autism got much, much better – performing twice as well as their peers,” Jennifer Foss-Feig, Ph.D., a postdoctoral fellow at the Child Study Center at Yale University and colleagues at Vanderbilt University said in the study.

In fact, the worst performing autistic participant performed about as well as the average of all non-autistic participants. But these aren’t super powers, at least not for those that deal with this hypersensitivity on a day to day basis.

“This dramatically enhanced ability to perceive motion is a hint that the brains of individuals with autism keep responding more and more as intensity increases,” Foss-Feig said. “Although this could be considered advantageous, in most circumstances, if the neural response doesn’t stop at the right level, it could lead to sensory overload.”

Normally, the brain has the ability to slow down its responses to the outside world – sight, sound, taste, smell and touch – when it becomes too intense. But the increased hypersensitivity to motion could show why autistic individuals struggle to cope with the world around them. The authors also say that this hypersensitive perception is the neural signature for a brain that is unable to dampen its response to sensory information, and that same “excitability” is found in epilepsy patients. This could also explain why up to one-third of autistic individuals also have epilepsy. And it may explain why autistic individuals sometimes disengage from the world around them.

“If the processing of our vision, hearing, and other sensory systems is abnormal in some way, it will have a cascading effect on other brain functions,” Carissa Cascio, Ph.D., assistant professor of psychiatry at Vanderbilt University, in whose lab the study was conducted, told PsychCentral.com. “You may be able to see better, but at some point, the brain really is over-responding. A strong response to high intensity stimuli in autism could be one reason for withdrawal.