Big and bigger babies are becoming quite the norm it seems the world over. First it was California baby Andrew Jacob who arrived weighing 15lbs 2ozs, then came the news of baby Sammisano Joshua Talai Otuhiva who was born in August last year weighing more than 16 lbs!. And now there is news from Southern China where another newborn has astonished the world with his extraordinary birth weight. 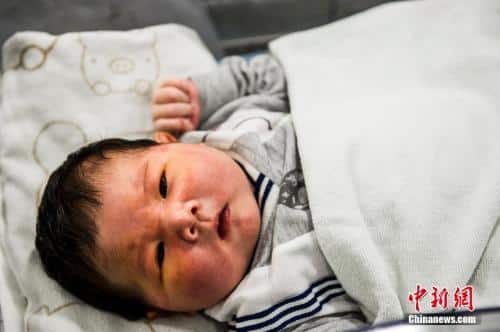 Mom Li from south China’s Guangdong Province gave birth to a baby boy on February 7 who weighed an astonishing 7.12 kilograms (about 15.7 pounds) at birth. The baby was delivered via C-section at the Shanwei People’s Hospital in Shanwei City in the province.

Knowing that they had just made a special delivery, the doctors and nurses of the hospital nicknamed the baby boy as ‘Xiao Pang’ or ‘Little Chubby’.

George King, who was born in March last year to a British couple, weighed in at 7 kilograms (15.4 pounds) and he was delivered naturally.

Many experts believe that more and more huge babies are being born because of the global rise of obesity and more moms with diabetes which may lead to bigger babies. A big baby himself is at risk of health conditions such as diabetes, obesity and heart conditions as he grows older. Not to forget the additional challenges that parents might face especially during the first year with added physical exertions from lifting the baby or with the need for above average sized clothes and diapers for the growing infant.

The global record for being the biggest baby is still held by baby Anna Bates according to Guinness Book of World Records. She weighed 10.4 kilograms (23 pounds), born in 1879. But if the trend of huge babies continues, 2014 may just see this record-breaking.