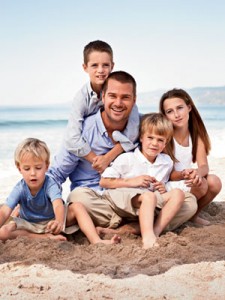 Actor Chris O’Donnell is known for his acting career in movies such as Scent of a Woman and Batman Forever. What few know is that he is also a devoted dad of five, who manages a career and fatherhood without the usual Hollywood help of a nanny.

When O’Donnell Burst onto the scene he was immediately swooned over by women who fell for his blue eyes and genuine smile. Now he is still winning fans by proving that an actor can also be a great father and husband. As he has taken a role on the new TV series, NCIS: Los Angeles, O’Donnell opened up to Redbook Magazine about his family life and what it is like with so many kids.

Here are some highlights:
Here you are in REDBOOK’s “Hot Husbands” issue. What’s it like to go from teen heartthrob to sexy leading man?

Oh, God, that’s funny. [Laughs] The only time it got really crazy was during Batman. Anywhere I went in the world, people knew who I was. I was being offered these huge films that would have taken my career to a different level, and I decided to put on the brakes. I knew if I continued on that track, I probably wouldn’t have gotten married.

And marriage and a family had always been important to you?

I knew when I got into this business I couldn’t have it both ways: I could live the playboy lifestyle, which is not a bad thing to do, or have a traditional family life, which is how I grew up. And that was more important to me. 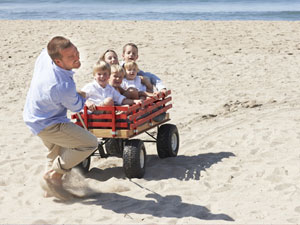 Let’s talk about all those kids of yours: What’s it like to have five?

I love it. I don’t have as much time with Maeve and Finn as I did when Lily and Chip were their age, and that makes me feel a bit bad. But they’re having a different experience; the kids create their own fun. One of my sisters has four kids and they live in our neighborhood. They’re all inseparable.

Do you think you’ll stop at five?

Oh, my God, yeah! To be honest, we got to four and said, “Wow, this is a lot.” We really wanted to have another girl, but we thought, That’s crazy. A year later we found out [we were pregnant] and were like, “Okay, a little miscommunication there….” [Laughs] But things work out for a reason, and we can’t imagine our life without Maeve. Look at those little pigtails — she’s Cindy Lou Who! 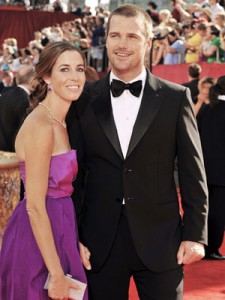 What do you aspire to be as a dad?

I think it’s easiest to teach by example. My dad didn’t tell us to work hard; we just saw how hard he worked. I know I have shortcomings — like a short fuse — but I’ve learned you can’t come home from a long day of work and snap at the kids. Caroline is really laid-back, so she’s helped me with that. I’m lucky. I think we balance each other out.

Chris’s wife, Caroline, also added her comments about his status as a father and husband.
Is there a difference between a “hot husband” and a hot dad?

He plays a vital role in our children’s lives, and that’s a big turn-on. The first time I met him, I watched him with his nieces and nephews and thought, He’s going to be a great dad. It’s what drew me to him in the beginning.