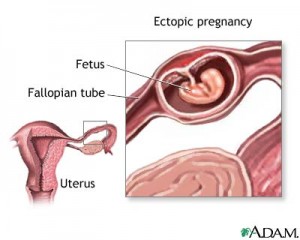 A chemical found in cigarette smoke may be linked to ectopic pregnancy, according to new research. The chemical can cause a woman’s eggs to implant outside the womb.

The chemical, called Cotinine, triggers the Fallopian tubes to increase their production of a specific protein, PROKR1. The protein normally is what helps a fertilized egg to implant inside the womb and begin pregnancy. However, when it is found in high levels inside the Fallopian tubes there is a higher risk of the fertilized egg not traveling down as it should. believe the protein can prevent the tubes from contracting and moving an egg into the womb.

Dr Andrew Horne, of the University’s Centre for Reproductive Biology, said: “This research provides scientific evidence so that we can understand why women who smoke are more at risk of ectopic pregnancies and how smoking impacts on reproductive health.

“While it may be easy to understand why inhalation of smoke affects the lungs, this shows that components of cigarette smoke also enter the blood stream and affect seemingly unconnected parts of the body like the reproductive tract.”

Nearly 1 in 50 pregnancies are ectopic in the Western World, and is the leading cause of death among women during the first three months of pregnancy. An ectopic pregnancy can also cause internal bleeding, severe damage to the Fallopian tubes, and fertility problems. Smoking is thought to increase a woman’s risk of having an ectopic pregnancy 4 times.

There was no research on the effect of second hand smoke on a pregnant woman in this study. – Summer, Staff Writer