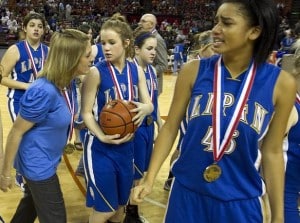 Want to talk about dedication?  Let’s talk about Amber Branson.  While most of us are still in bed 15 hours after delivering a baby, she was coaching basketball.

Amber is the coach of the Lipan High School girls basketball team, the Lady Indians.  The girls made it to the playoffs this season, and even though she was nine months pregnant, Amber was bound and bent on coaching her team to victory.

On February 25th, she coached the team to a regional semi-final win.  Amber then returned to her hotel room to rest but soon realised that her third child was getting ready to make her entrance.

Branson made it to the local hospital with little time to spare.  Baby Leslie was born about an hour later, weighing a healthy 8 lbs 7 oz and measuring 19.75 inches long.  Can you say future basketball player?

Amber and her husband Les have plans to introduce Leslie to the basketball court, sooner than later.  Her dad says she’ll play guard.

There was no time to rest after the birth.  At 2 p.m. the following day, Amber was in rough shape but the show must go on and the playoffs wait for no one.  Amber left the hospital and returned to the bench to coach the team to yet another win.

Amber didn’t have a chance to accept pain medication during labour, Leslie was just too quick.  Otherwise, she admits she might have missed the game.

“If I had the epidural, I might not have been able to make it.”

“I was pretty tired,” Amber said but added, “I never felt like I couldn’t do it.  God’s been good to me this week.”

For all her postpartum discomfort, Amber said the hardest part was leaving Leslie behind at the hospital, while she coached that day.

“I would have taken her with me if I could have,” she said.

Les Branson has heard some criticism of his wife’s decision but he defends her, “People don’t understand what basketball’s like in Lipan.”

Lipan is a small town and with only 76 students, Lipan High school is the second smallest school in the tournament.  The team’s achievements, this season, are huge.  This is the first time they have won a berth in the Texas State finals since 2003.

With another win under their belts, Amber made a bee-line for the hospital to recuperate and, “be a mom for a few hours.”  The team came to the hospital to meet little Leslie and have a team photo taken with her.

A week later, Leslie made it to the state tournament.  This time she was tucked under a pink blanket, next time she’ll have the ball.- Jen R, Staff Writer