Home » Coco Arquette Knows What She Wants From Santa This Year 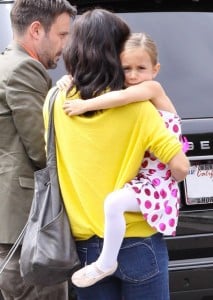 Coco Arquette On The Set Of Cougar Town With her parents

Coco Arquette already knows what she wants for Christmas this year, and her mom Courteney is not too happy about the request!

“She wants a puppy! Which is unfortunate because we have two dogs,” Courteney told People Magazine.

Even though, the actress is less than thrilled about bringing in a third dog into the house, she is already out looking for one for Coco to find on Christmas morning.

The 6-year-old has had a lot of adjustments to make the last couple of months with the split of Courteney and David Arquette.

A co-star of Courteney’s from ABC’s Cougar Town made the following observation about Coco earlier this month:

“The day that the news of the separation broke, there were paparazzi outside of their house, and they were taking pictures when Courteney took Coco to school. Coco sees these things, because that’s not a normal thing in any respect and she is a precocious child.”

Even in Hollywood, the children are most effected by the end of a relationship. There does seem to be some good news there though. Courteney and David have been spending more time together lately. Maybe the two will try again and give Coco an even better Christmas gift this year.