Home » Colombian Newborn Comes Back from the Dead

Ten hours after a newborn was declared dead, a baby girl in Colombia showed signs of life when her feeble cry could be heard inside the box she was placed in. Like a miraculous re-birth, the parents have aptly named the newborn Milagros (Miracles). 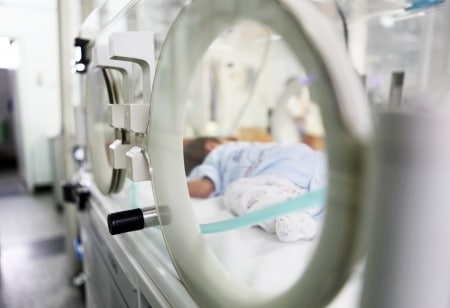 Jenny Hurtado was just 27 weeks pregnant when she was rushed to the San Francisco de Asis hospital in Quibdo at 2.45 am last Wednesday.

Thirty-five minutes later though, after the doctors had performed an emergency C-section, they declared the preterm baby dead at 3.20 am.

The newborn was taken to the morgue and placed inside a box while staff waited for the father of the child to arrive.

When the father arrived and an attendant placed the box in his hands, they were shocked to hear a feeble cry from inside.

The baby was immediately flown to the Santa Teresita del Niño Jesus clinic in the capital Bogota where she is currently at the clinic getting treatment for her under developed lungs in the intensive care unit. Her aunt Reyes Hinestroza is with the baby while mom is still in Quibdo recovering.

Doctors might have mistakenly declared the baby dead because of her soft heart beat.

Specialist doctor Javier Zagarra said, ‘In some cases the heart movements are not perceptible even though the newborn is alive, they can declare it dead. When they wrap the baby in a sheet, upon receiving warmth, the baby can then revitalize,’ he added.

This is not the first time a tiny newborn has been mistakenly pronounced dead and found alive. This past July, at a hospital in Londrina, south Brazil, baby Yasmin Gomes was declared stillborn as soon as she arrived. Instead of sending the newborn to the morgue, a nurse placed her in a box at the altar of the hospital chapel.  Three hours later, when the baby’s grandmother arrived with a mortician to pick up her body for burial, they were shocked when the infant kicked her legs when she was lifted and then opened her eyes!