Elysse Mata and her husband, John, like many other expectant parents: excited. But during a routine ultrasound last January, the couple learned that their twin girls were conjoined. Though rare, occurring in only about one out of every 200,000 deliveries, the overall survival rate is low – between just 5 and 25 percent. It is for this reason that the couple was referred to Texas Children’s Fetal Center. 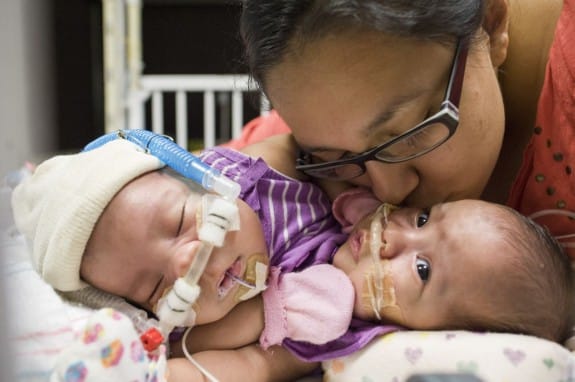 At the Fetal Center, Elysse underwent extensive imaging tests. Using those tests, a team of doctors began to devise a plan on how they could safely deliver both babies and provide appropriate postnatal care for their special needs. Then, on April 11, the girls – Knatalye Hope and Adeline Faith – were born via Cesarean.

Weighing in at just 3 pounds and 7 ounces, the premature birth left them small and with underdeveloped lungs. They also share a liver, a diaphragm, the lining of their heart (pericardial sac), and intestines. And although the girls will still need time to grow and become stronger before attempting any surgical procedures – until the reach about 6 to 8 months of age – doctors are already working on a plan that will help them separate the two girls. 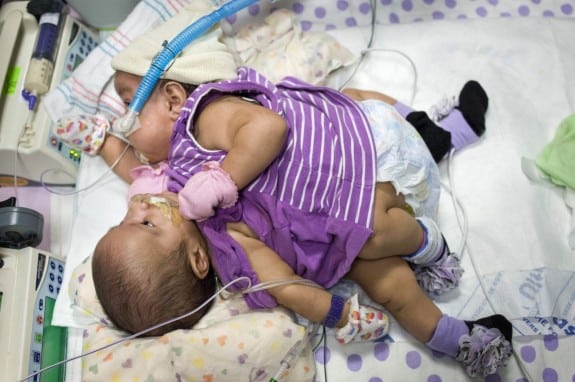 The first procedure was involved placing “tissue expanders” below the skin. This procedure, which is expected to take about 6 to 8 weeks, will gradually stretch their skin and encouraged new growth. The new skin will be used to close up the chest cavities of both babies once they are separated.

“The separation will involve many surgeons, including those from pediatric general surgery, urology, plastic surgery, orthopedic surgery, cardiac surgery, and gynecology,” Dr. Darrell Cass, pediatric surgeon and co-director of Texas Children’s Fetal Center, said in a statement to CBS news. “We will have two ‘teams’of surgeons. One table start, and then once the babies are separated, the two teams will separate to work on each infant and finish the reconstruction.”

Not all conjoined twins are separated. In fact, many factors are considered before planning a separation surgery – the largest ones being where the babies are fused, which vital organs are shared, and the expected survival rate. And, while advances in surgery have increase the success rate of conjoined twins separation, there are still some major risks – the biggest being loss of one or both twins. However, in the case of Knatalye and Adeline, doctors feel that such a tragic outcome would be unlikely.

While the girls are likely to need orthopedic surgery to help them walk, as well as a number of plastic surgery procedures in the future, doctors are very optimistic about their chances of survival and the potential success rate of their separation surgery.

“I’m expecting each child to be able to live independently and to have a very good life,” Cass said.