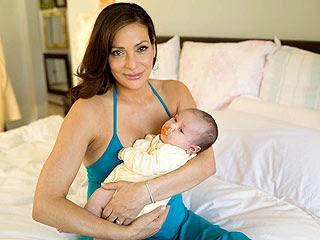 Constance Marie introduces us to her miracle baby Luna in this weeks issue of People.

It took the actress more than three years – including three attempts using the fertility drug Clomid in combination with intrauterine insemination and two failed efforts at in vitro fertilization – before reaching her goal of becoming a mother.

“She’s the sweetest pie and a big sleeper,” says Marie, 43, of daughter Luna Marie, born Feb. 5 via C-section. “We waited so long for her, she can boss me around as much as she wants!”

The new mom talks candidly to the magazine about her experience.

“I was 38½ years old when we started trying to have a baby,” says Marie, whose fiancé is yoga coach Kent Katich, 45. “I thought it would be no problem, but the 3½ years it took us was the most difficult period of my life.”

After going the natural route for a year, Marie tried the fertility drug Clomid combined with intrauterine insemination before contemplating in vitro fertilization. During the process, she got pregnant two times but both pregnancies failed.

“For us, it was one step at a time down a long road of dealing with fertility issues,” she says about resorting to IVF.

A third attempt at IVF combined with acupuncture proved successful.

“After a while, my normal attitude was that it wasn’t going to work out,” she says. “When I finally got pregnant the third time [with Luna Marie], I didn’t quite believe it. After three years of peeing on little sticks, I skipped the home pregnancy tests and waited until I got to the doctor to do a blood test. Only then did I believe it!”

Now, Constance wants to share her experience in order to help other women.

“I’m very supportive of women getting to a place in life when it’s right for them to start a family,” she says. “It’s important for women to take their time to come into their own. I only want to say we might not have as much time as we think we have.”