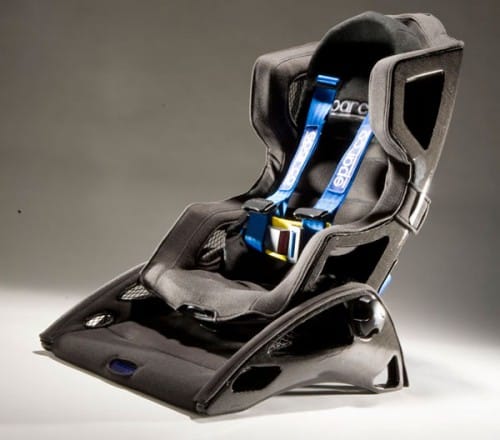 This well-designed seat is meant to appeal to racing enthusiasts with it’s edgy style.

The seat is not only extremely lightweight strong, but suits the needs of all three stages a child goes through when using a carseat. The first is a rear facing infant seat, the second and upright forward facing toddler seat, and third a youth booster seat. This carseat achieves this by having a central pivot that is not only adjustable but also removable to allow for these three different configurations. By combining all these stages it allows the buyer to not have to purchase three different carseats throughout the childs carseat years.

The seat, which is not currently in production, is fictitiously named it the “Sparco Wingman”. The designer named it this because he hopes to pitch the idea to the company in the near future.