Home » Could A Simple Cold Sore Be Potentially Deadly For A Newborn?

As an expectant mom, I was shocked and saddened to read ABC News story of Baby Mira. 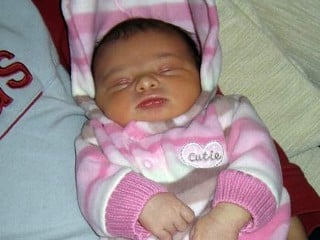 I hope parents to be pay close attention to this…

For about a week, Charlotte Raveney and Mohamed Eisawy’s daughter Mira was a happy, bubbly baby. Her delivery was exhausting, though, and Raveney developed a slight fever and a cold sore on her bottom lip three days later — the first one she had ever had.

When the sore had cleared up the next day, her parents didn’t think about it again and her mom didn’t connect her cold sore to her daughter’s death a week later.

Doctors determined that Mira died after contracting herpes simplex virus 1 (HSV-1), the same virus that can cause cold sores. Initially, Mira was fussy, would not breast feed for more than a few minutes, and had a pink and sticky left eye.

One night, Mira developed a rash on her stomach and went rigid on a table while her father was changing her. Her parents rushed her to the hospital, but by then the damage was done.

Most babies who contract herpes do so from their infected mothers via the birth canal.

“Herpes virus in a neonate is a dangerous infection,” Dr. Jon Abramson, chairman of the Department of Pediatrics at Wake Forest University School of Medicine said. “And most parents aren’t aware.”

Mira’s Mom was not infected with HSV-1 during her pregnancy because Mira’s blood tests showed no antibodies against the virus, antibodies that would have been passed through the placenta.

She believes she contracted HSV-1 in the days following Mira’s birth, likely from her husband, who had become infected years earlier, but had not had any outbreaks since the two had been together.

In this mom’s case, her healthy pregnancy was a detriment to Mira’s fragile immune system. But catching a cold or even the presence of antibodies against another herpes virus, such as chicken pox, which she once had, would not have offered protection because the viruses are too dissimilar to herpes simplex.

About 1,500 to 2,200 babies under 1 month old contract herpes each year in the United States, and untreated, the virus is fatal in up to 85 percent of cases. The majority of neonatal herpes simplex infections are caused by HSV-2, but about 30 percent are caused by HSV-1, according to the American Academy of Family Physicians.

Unfortunately, without active signs of infection, the symptoms of HSV-1 are non-specific and the advice this new mom received from general practitioners led her to believe her daughter was not ill and was simply taking some time to settle into the family routine.

According to Dr. Abramson, there are some things parents who have a herpes simplex virus can do to reduce the chance of passing it on to their infants. This includes washing their hands before and after touching their children and wearing masks to prevent viral transfer from the nose or mouth to the hands and then on to the baby.

Since Mira’s death, her mom has learned of three other families who have lost children due to a herpes virus infection.

“That breaks my heart,” she said. “It shows that it happens, and people don’t know about it and don’t talk about it.”