Home » Couple Expecting Two Sets of Twins – One from Surrogate, One from IVF 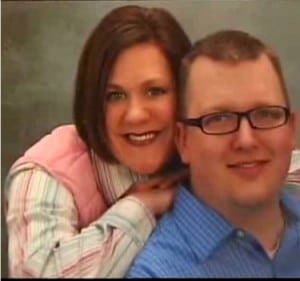 Misty and Brian Baker have been married for 14 years. For 10, they have been trying to have a baby. But after being drained emotionally, physically and financially from countless failed IVF attempts, they had almost given up. Almost.

Brian and Amber Pluceknbaum are from Indiana, the same state that the Bakers are originally from (they now reside in Seattle). They have two children of their own. Amber, having had a miscarriage herself, really wanted to give the Bakers a gift they would never forget.

“The only way I know how to describe it is, my arms literally ached for the want of holding my own baby when I had my miscarriages, and nobody understood. I want her to know what it’s like to hold her own baby, and that’s really the root of what got me even thinking this,” Amber said. She decided she would offer to surrogate for her friends, the Bakers.

Misty was ecstatic and accepted Amber’s offer without hesitation, “When she said she’d be willing to do it, it just felt so right and natural.”

So off to the clinic they all went. Embryos were created with Misty’s eggs and Brian’s sperm. The Bakers would then choose the two healthiest embryos for Amber’s implantation. Dr. William Gentry, the Indianapolis IVF specialist that would create and implant the embryos, also talked Misty into choosing four lesser quality embryos for herself.

“Why not both of you try? I mean, who knows,” Gentry said. “I think her thought was, ‘Sure, why not? But it’s not going to work with me. It never works.’” 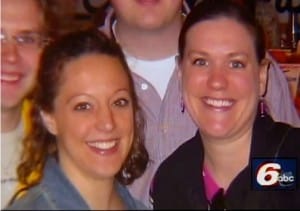 But it did work. Despite all of her failed treatments and previous miscarriage, it worked. She and Amber are now both carrying a set of twins. And everyone was shocked.

“Just complete and utter shock, I mean the doctor was as shocked as we were,” said Amber.

“Never both get pregnant with twins at the same time,” said Gentry. “I’ve never had that happen before.”

At first, Amber struggled with her role as a surrogate for the couple. She felt like maybe she hadn’t been needed after all.

“I was like, ‘Well, now I feel like what’s my point?’ What’s my purpose, because at first, it was Misty can’t get pregnant, so [they] need me,” Amber said. “Well, do you still need me? You know, and the doctor said, ‘Well, she wouldn’t be pregnant without you.’”

Studies have shown that the stress and worry that many women experience before and during IVF can actually be linked to decreased success. By having Amber surrogate, it’s very possible that she was finally able to relax enough to successfully carry. Dr. Gentry agrees.

“I think [Misty] thought her surrogate would be successful, so she thought, ‘What have I got to lose?’ So, she was chilled out, and who knows how that affects the immune system response to embryos?” said Gentry. 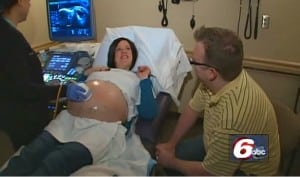 With that knowledge, time and Misty and Brian’s love and support, Amber’s feelings of not being important dissipated.

“We really feel like she was the missing piece that not only allowed us to have the children that she’s carrying for us, but also have these two,” Brian said, rubbing Misty’s belly during the interview.

Now, everyone is just focused on preparing for the four new additions to the Baker family, but that preparedness does come with a touch of sadness. The two pregnant women are thousands of miles apart right now, and as much as they want to be there to support each other, as much as Misty and Brian want to be there for their other children physically, early pregnancy complications have Misty grounded.

“I never would have dreamed that we wouldn’t have seen each other this pregnancy,” said Misty.

But both couples are doing everything they can to try and close the distance a little. Brian has been out to visit the Pluckebaums a couple of times to feel the twin girls move and kick. For the baby shower, the Bakers Skyped the Pluckebaums in so that everyone could “ooooo” and “ahhhh” over the new baby gear. And Misty calls Amber daily os that she can speak to Amber and the twins.

“I know these babies know my voice, and they know Brian’s voice,” talking about the boy and girl she is carrying, set to be named Connor and Hope. “Our babies [in Indiana] don’t as much, but they will.”

For now, the plan is to travel out to Indiana if Misty has already delivered. If she hasn’t, then Brian will forgo the experience of watching the girls in Indiana being born so that he can watch Misty deliver.

“I would definitely like to be there for the delivery in Indiana, but I’ll only travel out there if Misty has already delivered because I don’t want to miss that,” said Brian.

Even Amber, who is not being paid for her role as a surrogate, is very sad that the two of them can’t be closer to each other as delivery day draws nearer.

“I want to see her face when she becomes a mom for the first time, and I can’t,” Amber said.

Both women are due in June, but doctors believe that they will both deliver early. Once the babies in Indiana receive medical clearance, they will join their parents in Seattle.