Plant-based diets are becoming more and more popular for a variety of reasons; health reasons and cruelty to animals are the two most popular. Even well-known celebrities have made the switch; celebrities like Natalie Portman, Alicia Silverstone and even Bill Clinton. 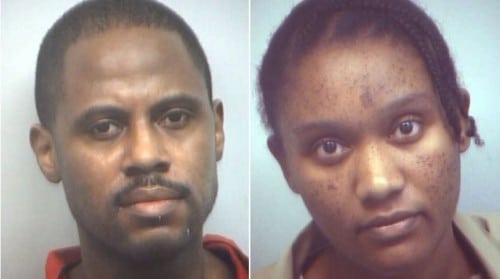 Yesterday Jade Sanders and Lamont Thomas were sentenced to life in prison for starving their infant son.  The pair claim that a ‘vegan’ diet is what they were adhering to when they chose to feed their newborn, Crown Shakur, only soy milk and apple juice – in dirty rancid bottles, nonetheless. And as you may guess, this diet was not enough to sustain his little life. His little body simply withered away and he weighed only 3¼ pounds when he died from extreme malnourishment in 2004.

“No matter how many times they want to say, ‘We’re vegans, we’re vegetarians,’ that’s not the issue,” said attorney prosecutor chuck Boring. “The child died because he was not fed. Period.”

The prosecution also added that, even if the couple didn’t understand what a vegan diet was, the death of the infant was just plain neglect. Most parents, vegans included, would question when their infant lost weight. This infant should have been to the doctor at one week and again at one month. If he had been in for these critical pediatrician visits, someone would have noticed the drastic weight loss and educated the parents on proper vegan practices.

The court agreed with Boring and the couple was convicted of malice murder, involuntary manslaughter, felony murder and cruelty to children.

A lack of education may be the reason behind a six week infant death but it a ‘vegan’ diet cannot be held responsible. Breastfeeding, which is recommended by the American Academy of Pediatrics for at least the first six months, is a vegan diet for infants. So is soy-based infant formula.

As a vegetarian for more than two years now and a mom that is always working towards a vegan diet, I know, on a very personal level, how much research most vegans and vegetarians put into their diet – especially when they have small children.

With a change to a plant-based diet, there is a serious need for education and understanding. A vegan or vegetarian diet is not just a lack of meat. It is learning how to live healthier without the saturated fats and hormones often found in meat and other animal products like milk and cheese.

It is possible to implement a vegan diet, even when you have small children – even the nutritional experts agree. However, there are certain nutritional elements that you have to be purposeful about as a vegetarian or vegan – particularly protein, iron, Vitamin D and B12, all of which can be found in the right kinds plant foods.

If you have ever thought of a vegan or vegetarian diet, you don’t have to let stories like this prevent you from giving it a try. You should, however, use stories like this to encourage you to take the right steps before a drastic diet change like veganism. Take the time to educate yourself on what a healthy vegan or vegetarian diet is. Ask questions and do your research. Many families, mine included, are able to live a healthy, plant-based life without sacrificing the health of the children.